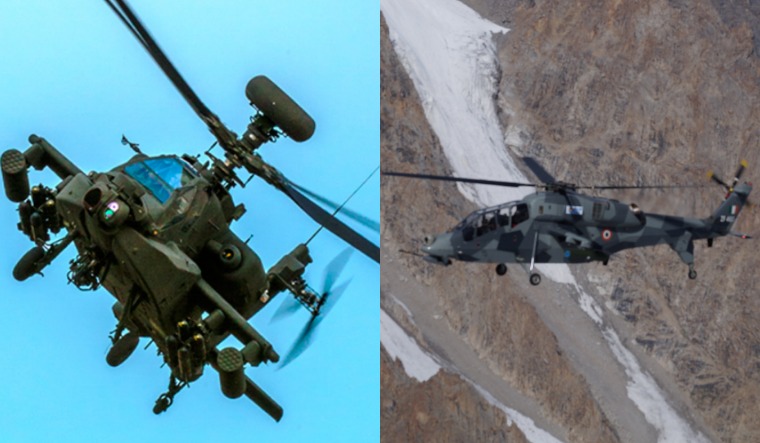 On Thursday, the Indian Air Force had announced that its chief, Air Chief Marshal R.K.S. Bhadauria, had flown a sortie on the US-built AH-64 Apache attack helicopter. Bhadauria flew the Apache during a two-day tour of airbases of the Western Air Command on November 17 and 18.

The Apache is the latest attack helicopter in the Indian Air Force, and the force received the first batch of 22 aircraft last year. The Apache has been deployed to Ladakh to support Indian forces moved there against the Chinese People's Liberation Army. The Indian Army is buying six Apache helicopters.

On Friday, news agency ANI reported Bhadauria had flown on the indigenously designed Light Combat Helicopter (LCH) while in Bengaluru. ANI reported that Bhadauria's sortie took 45 minutes. In August, HAL sent two LCHs to Ladakh. At the time, reports said the deployment of the LCH was 'symbolic' in nature.

Hindustan Times had quoted officials as saying, "The LCH holds a lot of promise but is not really capable of carrying out missions in its current configuration. It lacks anti-armour and air-to-air weapons. That’s work in progress."

How they are different

The AH-64 Apache has been in service with the armed forces of over a dozen nations since the first helicopter was delivered to the US Army in 1984. The Apache, which was built to destroy tanks of the Soviet Union, has seen multiple conflicts, including the US invasion of Panama, the Gulf War of 1991 and Afghanistan and Iraq invasions.

HAL has touted the LCH as being the only attack helicopter in the world capable of landing and taking off with considerable payload at high altitudes such as the Siachen Glacier.

The LCH is considerably lighter than the Apache, having a maximum take-off weight of about 5.5 tonnes, while the US-built helicopter can take off at a maximum weight of over 10 tonnes. This means the Apache can carry a heavier load of weapons. The Apache can carry up to 16 anti-tank missiles; the LCH can only carry eight such weapons. Moreover, the Apache is more heavily armoured than the LCH. The Apache has a 30mm gun, and has provision to carry over 1,000 rounds of ammunition for the gun. The LCH carries a smaller-calibre 20mm gun.

The Apache has a sophisticated radar mounted atop its rotor mast called the Longbow. The Longbow is a 'millimetre wave' radar that uses short-wavelength waves. The Longbow can simultaneously detect over 100 targets on the ground and in the air; the LCH lacks such a capability.

The LCH is not meant to be a heavy hitter carrying a large number of anti-tank missiles. On the other hand, its high-altitude performance characteristics make it well placed to combat UAVs.

Explaining the features of the LCH to onmanorama in 2019, an HAL official said, "This is the first attack helicopter with us, which has aerial combat capabilities. A moving UAV can be taken on easily with an air-to-air missile or with the front gun. This was a capability gap the services had and LCH will fill it now."

Writing in an online publication in February this year, retired air chief marshal Fali Homi Major noted that the Apache would "do well in the plains," but stressed it would have performance limitations in the high-altitude regions of the Himalayas.

Major, incidentally, was the first helicopter pilot to become chief of the Indian Air Force. Major argued the relatively low number of Apache helicopters on order by the Indian Army and Air Force, as of now, would be "grossly inadequate" for missions in multiple operational theatres. Major argued that the LCH could prove to be a ‘game changer’ if its development progressed smoothly.