Some legislators allege that Bengaluru, Belagavi got a lion's share of cabinet berths 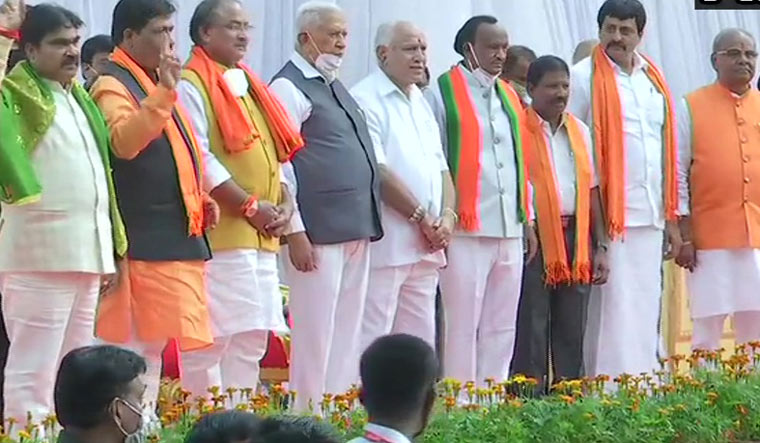 Seven ministers took oath of office on Wednesday at Raj Bhavan in Bengaluru after Karnataka Chief Minister B.S. Yediyurappa expanded the state cabinet for the third time since July 2019, when the BJP formed the government after toppling the ruling JD(S)-Congress coalition.

The cabinet expansion has once again triggered dissent and discontent among those denied a berth.

While Yediyurappa inducted three MLCs and four MLAs into his cabinet, he asked excise minister and Mulbagal MLA (independent) H. Nagesh to resign from the cabinet to keep a berth vacant.

"I have been part of BJP since 1993. Today, I am feeling the void left behind by late Ananth Kumar. Yediyurappa is not giving importance to party loyalists. I would like to ask what is the yardstick to become a minister in your cabinet," asked Bommanahalli MLA Satish Reddy.

BJP MLC A. H. Vishwanath, who is among the 17 JD(S) and Congress rebel MLAs, whose resignation had led to the collapse of the coalition government, alleged that Yediyurappa had failed to keep his word as those who made "sacrifices" like R. Munirathna and H. Nagesh had been left in the lurch.

"Out of the 33 cabinet members, 13 belong to the Lingayat community, 11 are Vokkaligas and four are from Kuruba community. You (Yediyurappa) have become a puppet in the hands of "sainika"(C.P. Yogishwar), who worked against the party and for my defeat. Why are you removing Nagesh and accommodating a fraud like Yogishwar? Nagesh, a dalit who quit his ministership and supported you, and Munirathna who made sacrifices to make you the chief minister have been let down. You have not kept your words," charged Vishwanath.

"What kind of government have you formed? Is this how you honour social justice. The Yediyur Siddalingeshwara will not forgive you," added Vishwanath.