All the members in the panel had backed the agri laws 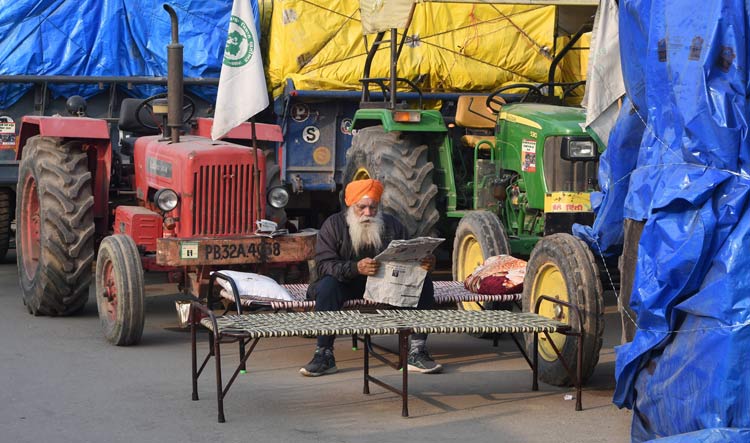 A farmer reads a newspaper during the ongoing agitation against new farm laws, at Singhu border in New Delhi | PTI

Forty-eight days after farmers laid siege to Delhi's borders, demanding repeal of the controversial agriculture reform laws, the Supreme Court intervened by suspending the three laws, and announced the setting up of a four-member panel to look into the issue. However, the farmers' bodies have refused to tone down their protests, saying they will not agree to anything short of repeal of laws.

Questions were also raised about the leanings and credibility of the four members appointed by the apex court. The members are: former Rajya Sabha MP Bhupinder Singh Mann, president of Bhartiya Kisan Union Dr. Pramod Joshi, agriculture economist Ashok Gulati, and Anil Dhanwat, president of Shetkari Sanghatana. It is to be noted that all the four members are in favour of the farm bills, and opening up of the agriculture sector to the corporate sector. While, the farmers bodies rejected the panel, they also questioned the pro-government stance of these members on the new laws.

The apex court directive is prompted by the law and order situation arising out of the farmers' agitation. The Chief Justice of India-led bench had questioned the lack of consultative process in framing the laws. The newly set-up panel will hold independent meeting with the various stakeholders before presenting its views.

The court, in its order while staying the implementation of three laws, said the MSP system as it existed before the enactment of the laws must be continued. It added that no farmer must be dispossessed or deprived of his title as a result of any action taken under the laws.

The Supreme Court asked the government to provide office space to the panel to listen to views of all bodies which are either opposed to the laws or are for it. The panel shall submit its report in two months from holding its first meeting. The first meeting is likely to be held in the next 10 days.

The farmers' bodies had expressed their unwillingness to accept anything less than repeal of the three laws. The court ruling has presented a new dynamic to the farmers' protest, and talks between them and the government. Agriculture Minister Narendra Singh Tomar, during the last meeting with the farmers, had told them that they should follow the court on the issue, as the government will not repeal the laws.

The farmers' refusal to adhere by the court directive may lead to a piquant situation. The government will go by the court judgement and may argue as the laws themselves have been suspended, the relevance of talks with the farmers on the issue may not be possible.

After the court's directive, there will be pressure on the farmers to relent. The farmers said they will continue with their protests and declare the modalities of Republic Day protest after the scheduled meeting with the government on January 15.

"It is a government trick to set up a committee through the Supreme Court. Earlier, the government had suggested setting up of committee. We don't approve of any panel. Even the members of the committee are pro-government as they have favoured the laws. Our protest will continue," B.S. Rajewal, a senior farmer leader, said.

“How can such a panel decide on the laws when its members are in favour of them. Even if there were members who were opposed to new laws, we don't accept it. The purpose of the committee is to put our movement in cold storage " Jagmohan Singh, farmer leader said. "We have come here for an indefinite period. It is not that our peaceful struggle will be over by January 26. We will continue even beyond that and create a nationwide movement."

“Suspending the implementation of the laws as an interim measure is welcome but is not a solution and the farmer unions have not been asking for this solution, given the fact that the implementation can be reinstated at any point of time. The government must withdraw the laws. It must understand that farmers and people of India are opposed to the laws,” All India Kisan Sangharsh Coordination Committee (AIKSCC) said in a statement. The umbrella organisation of farmers bodies is part of the Sanyukt Kisan Morcha spearheading the protest.

The court has also asked the attorney general to file an affidavit over the claim that Khalistani elements have entered the protest. The government's affidavit may hold key to how it deals with the protest subsequently as a law and order and national security issue.

After the apex court's directive, the focus has shifted from the government to farmers. The protesting farmers can either return with a feeling that they have won. However, as it appears from their stance they would continue with their protest. They also refused to send back aged, women and children back.