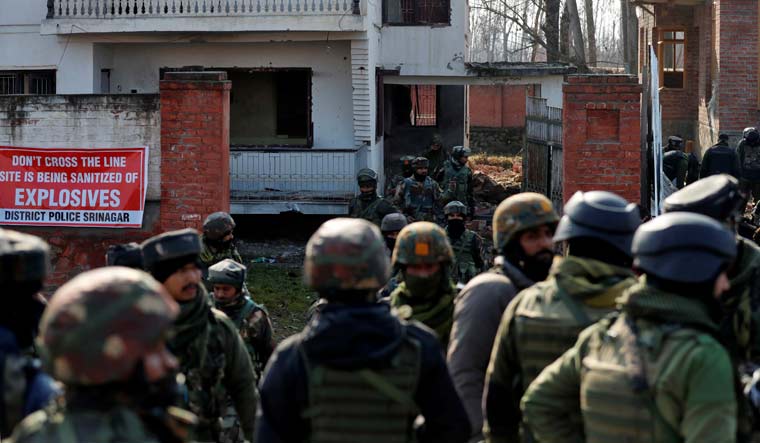 (File) Indian Army soldiers stand outside a house after a gun battle with militants in Hokarsar, on the outskirts of Srinagar | Reuters

Major General Gautam Chauhan, an officer of the Gorkha Rifles, last week took over as the first head of the Indian Army's Human Rights Cell at its headquarters in the national capital. Announced last year, the department aims to examine allegations of human rights violations during the Army's ongoing counter-insurgency operations in Jammu and Kashmir and parts of the Northeast.

The constitution of the Human Rights Cell comes soon after the Jammu and Kashmir Police submitted a charge-sheet in the July 2020 incident at Shopian when three youth from Rajouri were allegedly abducted and killed in an encounter by the Army. Soon afterwards, the Army had also shown recovery of huge cache of arms and ammunition from the 'encounter' site. Captain Bhoopendra Singh of the Indian Army and two civilians have been named in the case by the state police for hatching a conspiracy, kidnapping and killing.

Official said that, as per the mandate, the Human Rights Cell will have an officer from the Indian Police Service of the SSP/SP rank on deputation to provide investigative expertise and also facilitate the necessary coordination with other organisations including the ministry of home affairs, as the department will be the nodal point to examine any human rights violation complaints.

Over the years, the Army has been accused of human rights violations in Jammu and Kashmir and the Northeast, where it operates under the Armed Forces Special Powers Act (AFSPA). AFSPA allows the Army to deal with most complaints against military personnel through internal mechanisms at the level of local commanders. These mechanisms have sometimes been criticised for lack of transparency.

Several cases are pending with the Union home ministry for approval to investigate alleged human rights violations against Army officers. However, majority of those complaints turn out to be false or motivated after probe, an Army source claimed, while adding that human rights is a tool used by forces inimical to India to put the Army on the defensive.

As a next step towards the Indian Army's commitment to probity and transparency, an additional director general (vigilance) will also be appointed in the coming days. Last year, the MoD had approved an independent vigilance cell under the office of the Indian Army chief that will have three colonel-level officers—one each from the Army, the Indian Air Force and the Navy—to look into cases of corruption in the force.