What happened in the sensational Sister Abhaya murder case? Timeline of the incidents

The case had some massive twists and turns 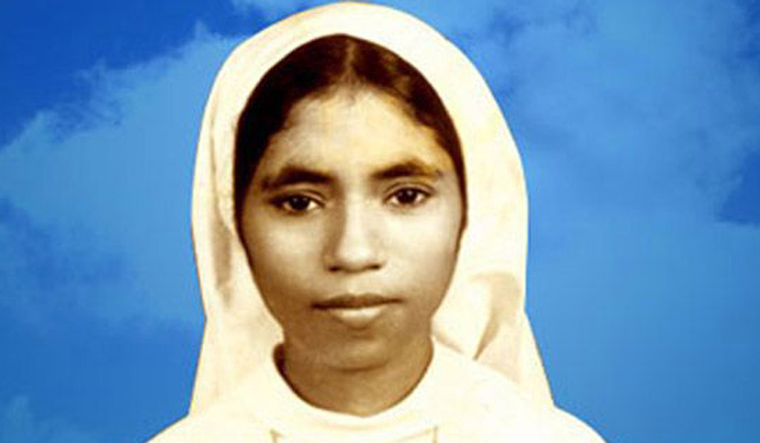 On March 27, 1992, Sister Abhaya, a nun of the Knanaya congregation and a second-year pre-degree student of Kottayam BCM College and a resident of Pius X convent in Kottayam, was found dead in the well of the convent. There were three accused in the case: Fr Thomas Kottoor, Fr Jose Poothrukayil and Sister Sephy. The prosecution charge is that Abhaya was hit with a hand axe and then dumped in the well of the convent by the three accused when they realised Abhaya had discovered them in “objectionable circumstances”. Fr Poothrukayil was let off by the CBI Special Court in March, 2018, citing poor evidence for his presence in the convent. Fr Kottoor and Sr Sephy remain the two accused. Their lawyers reject the charges, saying it was a case of suicide.

Fr Kottoor was the chancellor of the Kottayam diocese, and a psychology professor in BCM College, Kottayam, where Abhaya studied. He had also authored six books. Sr Sephy was a resident of the Pius X Convent. Poothrukayil was a Malayalam professor at BCM College. There were 177 witnesses but only 49 could be cross-examined. Much to the embarrassment of the CBI, many of its crucial witnesses, especially Abhaya's roommate Sr Anupama and a man who lived near the convent, Sanju P Mathew, turned hostile. They disowned before the special court the statements they had given the CBI earlier.

Sr Anupama told the Court that she had not said that she had seen Abhaya's footwear and headscarf, and an axe in the kitchen, the supposed scene of the crime. The CBI argument was that Abhaya's belongings lay scattered on the kitchen oor, hinting at the violence done to her. Sanju P. Mathew, the fourth witness in the case, had told the CBI during interrogation that he had seen Fr Kottoor's scooter parked in front of the convent on the night of Sr Abhaya's death, and also on the night before. But, before the CBI Special Court, Sanju said that he made that statement under duress.

As a consequence, the CBI had just the testimony of a thief, Adaykka Raju, to rely on to establish the presence of Fr Kottoor inside the convent on the night of Abhaya's death. Raju stuck to his earlier statement that he had seen two priests sneak into the convent while he was trying to steal the copper strips on the lightning conductor installed on the roof of the convent. The case had seen many twists and turns. The local police, which probed the case for 17 days, and the Crime Branch that took over said it was a case of suicide. It was CBI DySP Mathew P. Varghese who rst said it was murder but it seemed there was immense pressure on him to record the death as suicide. In protest, he quit service nine years before retirement.

The CBI then led three closure reports, in 1996, 1999 and 2005, essentially saying there was no evidence, but each time the Court asked for a reinvestigation. Later, the CBI found out that the Crime Branch had destroyed evidence and a former Crime Branch Superintendent of Police K.T. Michael was made the fourth accused in the case. However, along with Fr Poothrukayil, the SP too was acquitted for want of evidence.

The CBI was further thwarted when the High Court prevented it from using the findings of the narco-analysis done on the accused.

March 27, 1992: Abhaya found dead in mysterious circumstances in a well inside the premises of Pius X convent, Kottayam.

January 30, 1993: Crime Branch submits report to the Kottayam RDO court after a probe of nearly 10 months.

March 29, 1993: The CBI Kochi unit les FIR in the Chief Judicial Magistrate Court, Ernakulam. Within six months, the CBI team led by Kochi unit DySP Varghese P Thomas rejects the CBI nding that Abhaya's death was a suicide and concluded that the nun was murdered.

March 7, 1994: Varghese P. Thomas tells a specially convened press conference in Kochi that pressure was put on him by his senior officer, then SP of CBI Kochi unit V. Thyagarajan, to record Sister Abhaya's death as suicide in the case diary.

December 6, 1996; July 12, 1999; August 30, 2005: The dates on which the CBI led closure reports in the Chief Judicial Magistrate Court, Ernakulam. In all three instances, the closure reports were rejected and further probe ordered. They first said it was hard to say whether it was suicide or homicide, the second said it was murder but was hard to establish the identity of the perpetrators, and the third said no one was involved in Abhaya's death.

July 11, 2007: A small-time thief Adaykka Raju tells the CBI that he had seen two priests sneaking into the convent while he was trying to steal the copper rods of the lightning conductor installed at the roof of Pius X Convent.

May, 2008: Abhaya case was taken over by a CBI team led by CBI crime unit SP R.M. Krishna and CBI DySP R.K. Agarwal.

November 18, 2008: Three accused in the case—Fr Thomas Kottoor, Fr Jose Poothrikayil and Sr Sephy—arrested. This was 16 years after the death of Sr Abhaya.

July 17, 2009: CBI DySP Nandakumar Nair les a chargesheet against the three accused in the Chief Judicial Magistrate Court, Ernakulam. They were charged with murder, destruction of evidence, and defamation.

July 15, 2019: Supreme Court refuses to take cognisance of the release petitions led by Fr Kottoor and Sr Sephy, asks them to face trial in the CBI Special Court, Thiruvananthapuram.

December 12, 2019: The High Court quashes the Thiruvananthapuram CBI Special Court order summoning two doctors (N. Krishnaveni and Pravin Parvathappa) who had conducted narco analysis tests on the accused. The court observed that the narco analysis conducted on the accused was inadmissible as evidence according to the Supreme Court judgment in the Selvi vs State of Karnataka case. The SC had held that interrogation techniques such as narcoanalysis, lie-detector tests, and brain-mapping violated an accused person’s right against self-incrimination under Article 20(3), and his/her right to life and personal liberty under Article 21 of the Constitution.