Armed forces allowed to raise war reserves to fight up to 15 days of war: Report

Amid tensions with China and Pakistan, India raises ability to fight two-front war 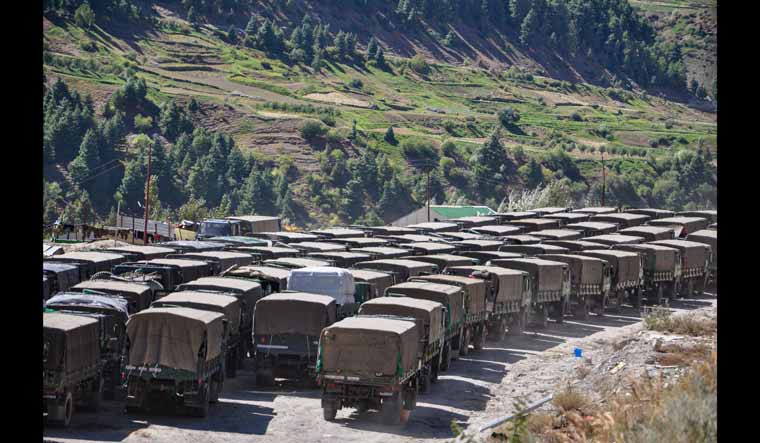 Manali: An army convoy carrying military material on its way to Ladakh amid border tension with China, at Manali-Leh highway, Saturday, Sept. 19, 2020 | PTI

Amid ongoing tensions with China and a string of ceasefire violations from Pakistan, the Indian Armed Forces have been authorised to raise their weapons and ammunition reserves to be able to fight 15 days of high-intensity conflict, up from the earlier ten-day mark.

According to a report by ANI citing government sources, the armed forces are expected to spend over Rs 50,000 crore to acquire both equipment and ammunition from local and foreign sources, using both the extended stocking requirements and the emergency financial powers granted after the stand-off with China began in Eastern Ladakh.

"A number of weapon systems and ammunition are being acquired now under the authorisation of having reserves to fight a 15-day intense war with the enemies. The stocking would now be at 15-I level from the 10 I levels," government sources told ANI.

According to the report, this authorisation was approved “some time ago”.

India’s War Wastage Reserves used to be for the forces to fight up to 40 days of war—this was reduced to 20 days in 1999 and later cut to 10 days. In 2015, a Comptroller and Auditor General (CAG) report revealed that India would run out of most of its ammunition within just 10 days. Such reserves are also calculated keeping in mind the threat of a two-front war with both China and its all-weather ally Pakistan.

Since June, India and China have been engaged in a standoff in the Eastern Ladakh region, with both sides deploying thousands of troops along the Line of Actual Control. Despite multiple rounds of talks, the standoff has continued into the winter—prompting India's military-industrial complex to kick into overdrive to keep troops supplied, warm, and ready.