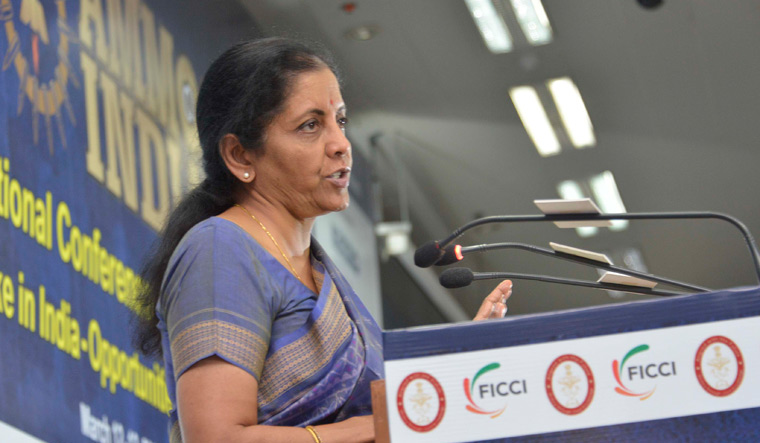 Aiming to address the issue of deficiency of ammunition available with the armed forces, Defence Minister Nirmala Sitharaman, while calling for revitalisation of defence sector public undertaking units, invited private players to invest in defence sector as the area has vast opportunities.

Speaking at the 'International Conference on Military Ammunition: Make in India—Opportunities and Challenges', Sitharama said her ministry has identified the opportunity that exists in this area, while adding that currently there are 37 defence licensed companies to manufacture arms and ammunition, and the figure might rise in the future.

"I encourage the private sector to come in the defence sector because of the agility they have shown. They have identified the opportunity that exists in this area," Sitharaman told a gathering of representatives from domestic and international ammunition manufacturing units, including Ordnance Factory Board. She also explained that the defence sector needed to be increasingly self reliant.

The Comptroller and Auditor General of India, in its report, has reflected the poor status of the ammunition stockpile as 74 per cent of the 170 types of ammunition failed to meet the Minimum Acceptable Risk Level (MARL) requirement, and only 10 per cent met the War Wastage Reserves (WWR) requirements.

Further, Sitharaman said small and medium industries have been given 50 per cent rebate on rental charges in the upcoming DefExpo, to be held in Chennai in April first week.

Her ministry has given Acceptance of Necessity for 8.6 lakh weapons, which includes assault rifles, close quarter battle rifles, carbines and light machine guns for Indian industry. Eight different types of ammunition of 21 variants for tanks, artillery and air defence among others, have been selected to be manufactured by the Indian industry.

According to the defence minister, the import of raw material was inevitable in some areas. She noted that defence PSUs needed to be made a bit more dynamic. "We have to revitalise them," she concluded.

Addressing the event, joint secretary (land systems), ministry of defence, Sanjay Prasad, while pushing hard for the modernistion of ordnance factories, said, "Recently, the ministry has given permission to the OFBs to tie up with foreign players in the industry to meet requirement of the armed forces. Earlier, OFBs have to take permission from the government before going to any partnership with a foreign player."

Speaking on behalf of the private players, Ashok Wadhawan, president, Punj Lloyd Limited said," Despite spending several years in the market, private industry is yet to gain confidence in the armed forces. Private players can fill the gap between OFBs and forces requirement, because armed forces need more than what OFBs can deliver on time."