Who is Arjuna Murthy, coordinator of Rajinikanth's political party

“He is Arjuna Murthy. Our party’s chief coordinator. He is my treasure,” Rajini said 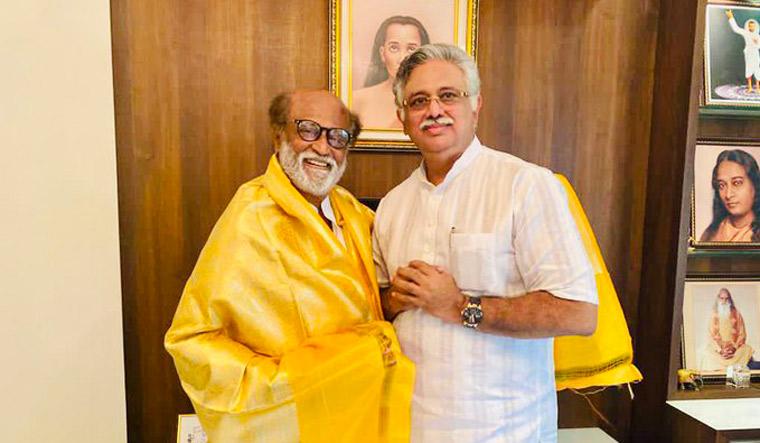 On Thursday, when superstar Rajinikanth finally ended the suspense over his political entry, his fans and well wishers were delighted. Fans from across Chennai drove all the way to his Poes Garden residence to share their happiness with the actor. Crackers burst as the chant "thalaiva" reverberated in the air. On the portico of his residence was Rajinikanth, clad in a white kurta, and flanked by two men—Tamilaruvi Manian, a former Congressman and Gandhian, and another person who the superstar introduced to the media as the chief coordinator of his party.

The star was in all smiles as he introduced the grey-haired man, clad in a white kurta. “He is Arjuna Murthy. Our party’s chief coordinator. He is my treasure,” Rajinikanth said, introducing the man.

A new face in Tamil Nadu political circles, the man graciously accepted the superstar's words of praise with a smile.

Hours later, a statement was released by Kamalalayam, the BJP office in Tamil Nadu. “Arjuna Murthy resigned as the president of BJP Intellectual cell. He has been relieved from all his duties," read the statement. It also asked the BJP cadres not to have any connection with him.

It may be recalled that he had set up a team to bring out an e-book on the Chettiar community.

Highly placed sources in the state BJP say Murthy always had an important role in the party, especially after L. Murugan was appointed as the state unit president. He was also actively involved in BJP’s Vel Yatra and was even taken into custody by the state police during the yatra.

On December 3, just 15 hours before meeting Rajinikanth, Murthy had an hour-long discussion with Murugan on the plans for the party's intellectual cell, but did not reveal his intention to switch sides. Sources in the BJP also confirm that even people in the party’s IT wing, who were considered very close to him, never knew about his links with the superstar. However, they say he would always be seen boasting about his friendship with RSS ideologue S. Gurumurthy and the latter’s idea about Rajinikanth's politics.

Sources told THE WEEK that Gurumurthy recommended Murthy to the actor-politician. A few days before the actor announced his political plunge, Murthy had met the superstar, say sources.

On Thursday, after it was reported that Murthy had links with DMK’s first family and was the personal secretary of late Murasoli Maran, Lok Sabha MP and Murasoli Maran’s son Dayanidhi Maran clarified on Friday that, "there is a false news published in media that Arjuna Murthy was an associate or advisor to my late father Murasoli Maran. This is completely untrue. No such person had been an advisor to my father.”

Hailing from the influential Gounder community, Murthy was raised in Pudukottai, a southern district in Tamil Nadu bordering Madurai and Tiruchi. His father Ramaswamy was a businessman and owned Janatha Roadways, which was into lorry services. Later, the business was sold off and Murthy moved to Chennai.

An entrepreneur and a technocrat, Murthy, along with his daughter Lakshmi Deepa, is one of the directors of a company called Yeldi Softcom Private Limited, a financial technology start-up. Registered as Eldi (India) Softcom Private Limited in 2008-09, the company was later renamed as Yeldi Softcom private limited, with its registered address at Shanthi Colony in Annanagar, Chennai, as per the records accessed by THE WEEK through the ministry of corporate affairs. The company’s turnover, including other income, stands at Rs. 39.45 lakh for the financial year 2016-17 as per the records accessed by THE WEEK, from the Registrar of Companies (RoC).

His company made a loss of around Rs.11 crore during the year 2016-17 as per RoC. Originally conceived as a near field communication (NFC) technology company to make products for facilitating wireless cash transactions, the company’s ecosystem consists of NFC handset, NFC contactless cards and mobile apps. Valued over $ 200 million, according to RoC, the company has businesses in Sri Lanka, Bangladesh, Philippines and Middle East. He is also the director of two other companies—Genie Foods Limited, a company registered with RoC in May 1991 and Zujubi Bazaar Private Limited, launched in 2013 and not active in operations as of now.

When THE WEEK tried reaching him over phone, to ask about his new political assignment with Rajinikanth and his success as an entrepreneur, Murthy was not available to talk. A devotee of Mata Amritanandamayi and Swami Omkarananda, Murthy has always been spiritual person. Recently, he had tweeted a video of him being blessed by Amritanandamayi.

Though Murthy is not known to be person with experience in electoral politics, he will be the in-charge of social media and other digital platforms for Rajinikanth. As a chief coordinator, he will also be offering other technological assistance to the actor-politician.

Sources in the BJP said as an industrialist, he is also expected to liaison with corporate companies to route funds to Rajinikanth’s yet to be launched political party.

Though Rajinikanth had been repeatedly maintaining that he is in no way linked to the BJP and that the opinion makers and political observers are trying to saffronise him, the appointment of Murthy as his party’s chief coordinator speaks volumes about the course of Rajinikanth’s politics in the state.