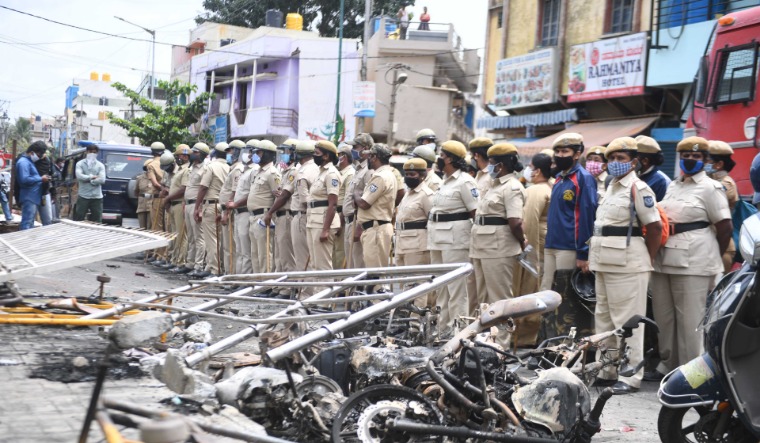 The National Investigation Agency (NIA) on Wednesday conducted searches across 43 locations in Bengaluru including four offices of the Social Democratic Party of India (SDPI) in connection with the August 11 Bengaluru riots case.

During the raids, the NIA sleuths recovered incriminating material related to SDPI and PFI, and seized sword, knife and iron rods, said a press release.

The NIA took over the investigation of the two cases of arson and rioting on September 21, 2020, as the state police had invoked the Unlawful Activities (Prevention) Act as the mobs had attacked two police stations – Deevara Jeevana Halli and Kadugondanahalli.

The two FIRs filed by the state police were re-registered by the NIA as cases pertaining to large scale rioting armed with lethal weapons causing injuries to police personnel, destruction of public and private property including DJ Halli and KG Halli police station buildings, and public and private vehicles. It also stated that the riot had led to fear and panic in the nearby areas and was intended to "cause terror" in the society.

On August 11, more than 1,000 people had gathered in front of Congress MLA (Pulakeshinagar) Akhanda Srinivas Murthy's residence in Kavalbyrasandra, Bengaluru. The mob was allegedly protesting against a derogatory social media (Facebook) post about Prophet Mohammed uploaded by Naveen, nephew of the sitting MLA.

The NIA has noted that the SDPI state secretary Muzammil Pasha had called for a meeting on the day of the riots and directed the members of PFI/SDPI to instigate the mob and incite violence. The mob went on rampage in DJ Halli, KG Halli and Pulakeshi Nagar.