A 'Hindu India' would be a 'Sanghi Hindutva' state: Tharoor in new book

Tharoor's 'The Battle of Belonging' was released on Saturday 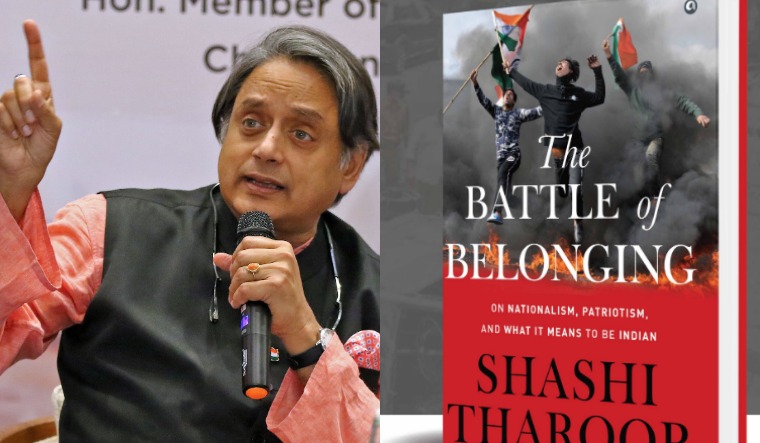 A 'Hindu India' would not be Hindu at all, but a "Sanghi Hindutva state", which is a different country altogether, says Congress MP Shashi Tharoor in his new book, The Battle of Belonging, that was released on Saturday.

"People like me want to preserve the India we love, and not turn our beloved nation into the kind of religious state we were brought up to detest," he said.

Tharoor also asserted that Hindutva movement rhetoric echoes the bigotry that India was constructed to reject.

In the book, published by Aleph Book Company, Tharoor makes a stinging critique of the Hindutva doctrine and the Citizenship (Amendment) Act, which he says is a challenge to, arguably, the most fundamental aspect of 'Indianness'.

Devoting a chapter to the 'Hindu Pakistan' controversy in the book, the former Union minister writes, "I had inveighed against the ruling party's attempts to create a Hindutva version of Pakistan, since that was not what our freedom movement fought for, nor was it the idea of India enshrined in our Constitution."

"This is not just about the minorities, as the BJP would have us believe. Many proud Hindus like myself cherish the inclusive nature of our faith and have no desire to live, as our Pakistani neighbours are forced to, in an intolerant mono-religious state," he writes.

Tharoor's reported comment last year that the BJP will pave the way for creation of a "Hindu Pakistan" had sparked a controversy, with the party demanding his apology over the remarks.

Hinduism, as Swami Vivekananda asserted, teaches the acceptance of difference as a basic credo, Tharoor said in the book.

"Hindutva is not Hinduism; it is a political doctrine, not a religious one," he said.

"What is bizarre about the media drama over my remarks is that no one who was giving airtime to multiple BJP voices, frothing at the mouth about my words, actually asked them one simple question: 'Is the BJP giving up its dream of a Hindu rashtra?'" Tharoor said.

BJP apologists point out that the government has done nothing to amend the Constitution, and others have suggested that the Supreme Court's ruling that secularism is part of the 'basic structure' of the Constitution makes the idea of a 'Hindutva Pakistan' impossible, he said.

"But the fact is that both have only been held at bay by the simple fact that the BJP has not had the numbers required to achieve their goal—two-thirds of both Houses of Parliament and half the states," he said.

Their overwhelming victory in the Lok Sabha elections in 2019 and winning a plurality of seats in the Rajya Sabha in June 2020 has ensured that they finally have all the elements needed to fulfil their "project", he said, adding that the nation has been "warned".

Tharoor argues in the book that the battle is between two opposing ideas of India or what might be described as ethno-religious nationalism versus civic nationalism.

In a sharp criticism of the CAA, Tharoor said it is the first law to question a basic building block of the nation—that religion is not the determinant of our nationhood and, therefore, of our citizenship.

“At a time when India's major national priority ought to have been its flailing economy, whose plummeting growth rate had already aroused widespread alarm even before the coronavirus struck, the Modi government plunged the country into an unwanted political crisis of its own making with the CAA,” he said.

"With its penchant for shock and awe, the government pushed through Parliament legislation that fast-tracks citizenship for people fleeing persecution in Pakistan, Afghanistan and Bangladesh—provided they are not Muslim. By excluding members of just one community, the new law is antithetical to India's secular and pluralist traditions," writes Tharoor.

The Hindutva movement is the mirror image of the Muslim communalism of 1947; its rhetoric echoes the bigotry that India was constructed to reject, Tharoor said.

Its triumph would mark the end of the Indian idea, the Congress leader added.

In the book, Tharoor also delves into the issue of the slogan 'Bharat Mata Ki Jai' allegedly becoming an "acid test of Indian nationalism" and reiterated his stance that no Indian should be compelled to mouth a phrase that is nationalistic in the eyes of some, but not in his own.

Revisiting the 2016 controversy involving Muslim legislator Waris Pathan, who was suspended from the Maharashtra Assembly for refusing to utter the slogan, Tharoor noted that some Muslims say, "'Tell us to say Jai Hind, Hindustan Zindabad, Jai Bharat, we'll do it; but do not ask us to say Bharat Mata ki Jai'."

Tharoor also criticised the manner in which Article 370 was abrogated on August 5, 2019, saying Modi shocked the nation with an announcement on Kashmir that could well turn out to be the "political equivalent of demonetisation".