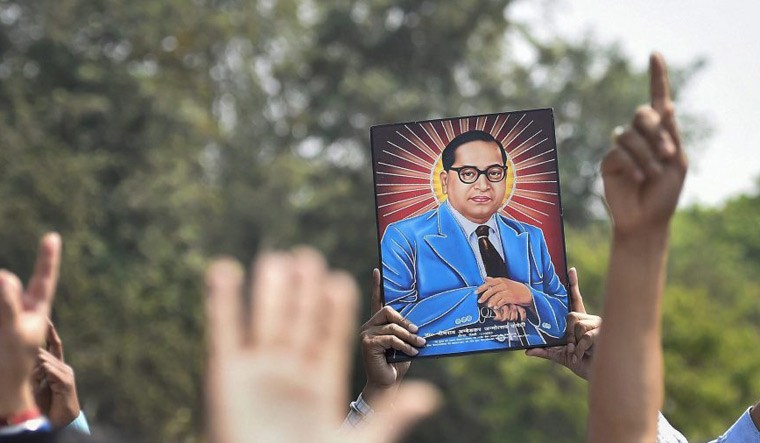 Days after reports of a dalit woman panchayat president in Tamil Nadu’s Cuddalore made to sit on the floor during a meeting went viral, yet another shocking incident of caste atrocity has emerged from the state. A goatherd from the dalit community was made to prostrate in front of a man from the dominant Thevar community, near Kayatharu Taluk of Thoothukudi district.

While making the goatherd fall at the man’s feet over an argument that one of his goats entered the upper caste Hindu man’s farm, others shot a video and shared it on social media.

The issue came to light when the Lok Sabha MP from Chidambaram constituency and Viduthalai Chiruthaigal Katchi (VCK) founder leader Thol Thirumavalavan shared it on Twitter, calling it “atrocious”.

The incident happened on October 8 at Olaikulam village near Kayatharu in Thoothukudi, when 60-year-old A. Palraj was made to apologise by prostrating at the feet of Sivasangu Thevar.

Palraj was tending to his herd of 90 sheep and 10 goats at Nadukanmoi in Thirumangalakurichi village when one of the goats mingled with the herd belonging to S. Sivasangu Thevar. Thevar got annoyed and made derogatory remarks against him as Palraj was from the dalit community. Following this, Thevar called his relatives and attacked Palraj. In the meantime, his relatives, Mahendran and Maharajan, who came to argue in his favour, shot a video of Palraj. They allegedly made him fall at Thevar’s feet several times and shared the video on social media.

After the video went viral with Thirumavalavan’s tweet, the Thoothukudi Police and district administration swung into action.

“I prostrated before Sivasangu Thevar several times. I was upset for being forced to do it. But they compelled me as I belong to the dalit community. They humiliated me with casteist slurs. They did it to defame me and even threatened to kill me if I don’t fall on his feet,” Palraj said in his complaint.

Thoothukudi collector Sandeep Naduri said that an FIR has been registered based on Palraj’s complaint. Following this, the Kayatharu police booked six men, which includes Sivasangu Thevar, P. Mahendran, P. Maharajan, Sakilipandi, Veeramaari, S. Periyamaari, and a woman S. Udayammal under the SC/ST Act for forcing Palraj to prostrate before them.

“This is atrocious. The mindset of the people has changed over the past few years, as there have been no stringent action by the ruling government in the state for the past few years. Though caste existed, discrimination in the name of caste was not reported all these years,” VCK’s Lok Sabha MP Ravikumar told THE WEEK. He recalled the recent incidents of how the dalit women panchayat presidents are being discriminated.

“Following the Cuddalore incident, few more have come out now. This is because only now these women presidents believe that the government will take action,” Ravikumar pointed out.