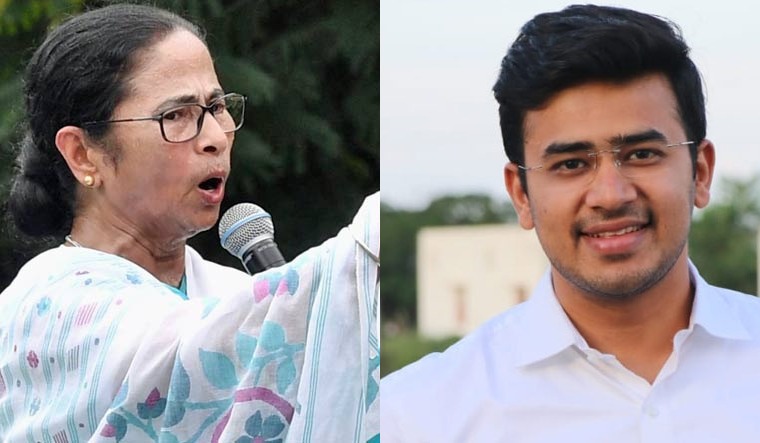 Newly appointed Bharatiya Janata Yuva Morcha president Tejasvi Surya on Wednesday alleged that the Mamata Banerjee government has shut Nabanna, the state secretariat, out of fear ahead of the organisation's march on Thursday.

He said that it was expected that permission would be denied for the rallies, while asserting that the protest programme will be a success and will see participation by at least 50,000 people.

The West Bengal government has cited the pandemic to deny permission for a major gathering during the BJP youth wing's scheduled ‘March to Nabanna’ on Thursday and said peaceful and democratic rallies within "permissible parameters" of only 100 people would be allowed. The BJYM rally is scheduled to begin at 12pm on Thursday.

The government also announced that Nabanna will be shut for two days from October 8 "for sanitisation purpose".

Addressing a press conference around 11 pm at the BJP office in Kolkata, Surya said, "Mamata didi has got afraid. I have learnt that she has closed the CMO. This is the sign of a real paribartan (change) in Bengal and this is being led by the patriotic youth of the state and the rest of the country is with them."

He said that the state government is citing the COVID-19 situation to deny permission for the BJYM march, but the Trinamool Congress supremo had herself led a rally against the farm bills a couple of days ago.

"Are there one set of rules for the TMC and another for other parties?" he asked.

“Mamata ji is a living example of what a fascist government looks like," Surya said, adding that he has come to participate in the first protest rally after being appointed the national president of the Bharatiya Janata Yuva Morcha.

On the closure of Nabanna for two days, he claimed that the state secretariat has been closed in all practical terms since Mamata Banerjee took over as chief minister.

The decision to shut down Nabanna on working days drew condemnation from the BJP leadership, which termed the decision as a "reflection of TMC's fear", but maintained that they would go ahead with the programme.

Alleging that the most corrupt government is in power in West Bengal now, he said, "Because of this government of syndicates and cut money, unemployment is increasing in the state."

Alleging that those who raise their voice against the TMC government are eliminated, Surya claimed, "In the last two years, at least 200 members of the BJP's youth wing have been killed by goons of the TMC."

Claiming that all nationalist young men and women of the country are with the youth of Bengal, he said that they will together bring down the TMC government in the state and restore the lost glory of Bengal.