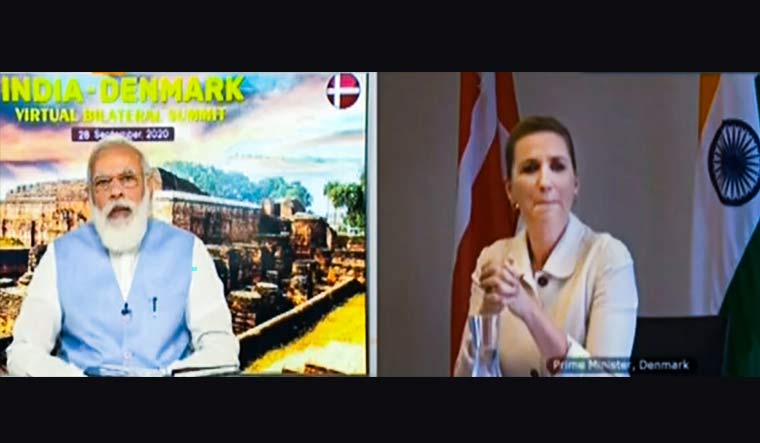 India and Denmark are going green, diplomatically. Today, the two countries agreed to scale up their bilateral ties to a “Green Strategic Partnership”, during the bilateral summit between Prime Minister Narendra Modi and Denmark premier Mette Frederiksen.

Terming the tie-up a new-age partnership, Modi said that the old mantra of the bilateral—Denmark has the skill, India the scale—also needs to be reworked to include scope and speed.

The two countries already have robust ties on green energy. Denmark is the most energy efficient nation in the European Union and several Danish firms have invested in the green energy segment in India, including wind farming. Modi noted that these companies now not just Making in India, but also Making in India for the world, thus boosting India's manufacturing capabilities.

The two countries will soon set up an India Denmark Energy Park as well as an India Denmark Skill Institute to train Indians for jobs in these firms. There are over 140 Danish companies in India, employing nearly one lakh Indians. India also has a big presence in Denmark, mainly in the IT sector.

“The Green Strategic Partnership is a mutually beneficial arrangement to advance political cooperation, expand economic relations and green growth, create jobs and strengthen cooperation on addressing global challenges and opportunities,'' says the joint statement. It adds that the two countries agree to be at the forefront in the global fight against climate change. “Together, the two countries will show the world that delivering on ambitious climate and sustainable energy goals is possible,'' the statement says. Ambitious goals and actions will be identified in a time bound action plan soon, said Neeta Bhushan, joint secretary, Central Europe, in the Ministry of external affairs.

Circular economy, water management and sustainable urban development are buzzwords in the new partnership. The two countries also decided to partner their towns, Udaipur has been twinned with Aarhus and Tumakuru has a sibling in Aalborg.