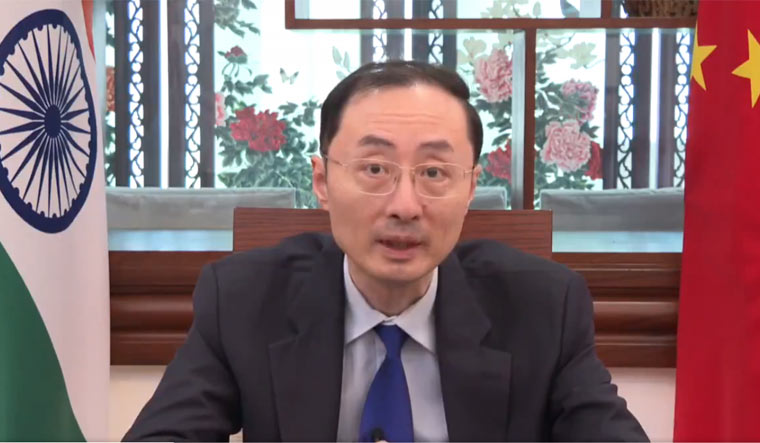 The Chinese Ambassador to India Sun Weidong on Monday called for India to “stop provocations such as firing and other dangerous actions” along the border, stressing the importance of the five-point roadmap agreed to by External Affairs Minister S. Jaishankar and Chinese Foreign Minister Wang Yi.

In a lengthy statement, published in the form of a series of Q&As on the Chinese embassy website, Weidong said that it was important for India and China to pursue “win-win cooperation” instead of a “zero-sum game”, noting that the two foreign ministers had reached a “five-point consensus” that the two sides should “follow leaders' consensus, ease tensions, maintain peace and tranquility in the border areas, continue diplomatic communication and expedite work to conclude new confidence building measures”

“It is an important step towards the right direction, and will provide political impetus to ease the border situation and promote the bilateral relations,” Weidong added.

Significantly, the statements include a question on the “quick disengagement and withdrawal of trespassing Indian troops”, to which Weidong said it was important to move back “all personnel and equipment that have trespassed”.

“Recently, the relevant Indian Ministries had claimed in the statements that Indian troops ‘pre-empted’ Chinese military activity on the South Bank of Pangong Tso Lake, which obviously revealed that there are illegal trespassing the LAC and status quo change in the border areas. Some Indian media had quoted government sources to disclose that the Indian army fired shots on two different occasions. For the first time since 1975, the calm in the border areas was broken by gunfire.”

Amid reports that India had occupied strategic heights along the southern bank of Pangong Tso, tensions have been high between both sides with India claiming to have repelled a Chinese transgression in the region and reinforcing its presence in the area.

“In this context, State Councillor and Foreign Minister Wang Yi reiterated in the meeting with EAM that the imperative is to immediately stop provocations such as firing and other dangerous actions that violate the commitments made by the two sides. It is also important to move back all personnel and equipment that have trespassed. The frontier troops must quickly disengage so that the situation may deescalate. The Chinese side supports enhanced dialogue between the frontier troops on both sides to solve specific issues, and will stay in touch with the Indian side through diplomatic and military channels.”

“Regarding the future development, the two foreign ministers agreed that as the situation eases, the two sides should expedite work to conclude new confidence-building measures to maintain and enhance peace and tranquillity in the border areas. The way ahead for solution is very clear,” he concluded.

The statement comes a day before Indian Defence Minister Rajnath Singh is likely to make a statement in Parliament on Tuesday on the continuing standoff between Indian and Chinese troops along the LAC in eastern Ladakh, parliamentary sources told PTI.

With the opposition parties eager to discuss the government’s handling of the border clash with China, Prime Minister Narendra Modi in his pre-session address said he was confident that Parliament would send a message in one voice that it stands with the soldiers guarding our borders.

Meanwhile, the Union Cabinet and the Cabinet Committee on Economic Affairs are also likely to meet over video conferencing on Tuesday afternoon, government sources said.

During the monsoon session, which began on Monday, the opposition is seeking to corner the government on its handling of the standoff with China along the Line of Actual Control in Ladakh, the COVID-19 situation, economic downturn and unemployment, and is pressing for discussions on these issues.

In a thinly-veiled reference to Pakistan and China, India on Monday said that when some countries are busy taking undue advantage of the COVID-19 pandemic by increasing their support to terrorism or to adopt aggressive policies, New Delhi has focussed on immediately extending medical assistance and supporting countries vulnerable to the pandemic.

The Fund, established in 2017, has so far supported 59 projects in 48 countries, through $47.8 million in contributions from a $150 million multi-year pledge by the Government of India.

"At a time when some countries are busy taking undue advantage of COVID-19 to spread divisive disinformation or to enhance even more their support to terrorism or to adopt aggressive policies, India's answer has been to immediately come to the support of countries vulnerable to the pandemic, rush urgently needed medical supplies, strengthen national health capacities and mitigate the diverse socio-economic impact of this crisis, Tirumurti said.

While Tirumurti did not name Pakistan and China, the reference to the two nations was clear as he noted that some countries are taking advantage of the circumstances arising out of the COVID-19 pandemic to increase their support to terrorism or to adopt aggressive policies.