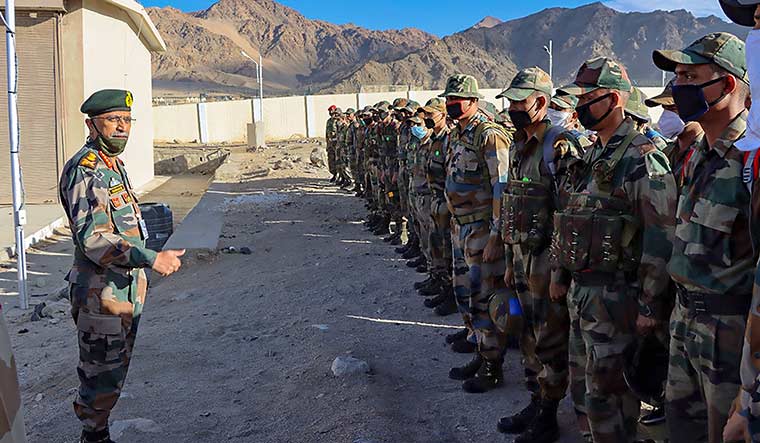 ON AUGUST 29, when Indian troops thwarted an aggressive move by the People’s Liberation Army (PLA) on the southern bank of Pangong Tso, Chinese foreign ministry spokesperson Hua Chunying used a Chinese proverb to explain what happened. “A guilty man protesting conspicuously his innocence,” she said. Hua’s attempt to put the blame on India betrayed Beijing’s nervousness about India’s latest ‘offensive’ along the Line of Actual Control, the disputed Sino-Indian border.

China once again tried to paint India as the aggressor a few days later. On September 7, shots were fired on the LAC for the first time since 1975 and China blamed India for attacking its guards patrolling the Mukhpari area in Ladakh’s Chushul sub sector. India denied the charge and said it was the PLA which fired in the air to intimidate Indian soldiers.

The PLA appears to be in a state of consternation, especially after Indian troops managed to occupy a few critical heights in the Chushul sub sector, giving them the capability to engage the enemy’s artillery guns, anti-tank guided missiles, rockets and other weapon systems. Indian units, reinforced by a regiment of T-90 battle tanks, have been deployed in strength in the region, from where they can defend the vulnerable Spanggur pass.

General (retired) V.P. Malik, who led the Army during the Kargil war, said the latest moves on the LAC indicated a distinct change in how India dealt with China. “It is no longer a static policy,” he said. India has the edge on at least six positions in the region including the strategic heights south of Pangong Tso and close to Spanggur Tso, Reqin La, Rezang La, Thakung and Magar Hill. There are about 30 dominating heights along the 800km-long eastern Ladakh section of the LAC, and if Indian troops manage to capture those heights, it will give them a definite advantage.

“It may trigger some kind of realisation among the Chinese that India is not going to accept the status quo and it may prompt them to come to the negotiating table,” said former northern army commander Lieutenant General (retd) D.S. Hooda. He said the continuing standoff was not acceptable to Indian military planners. South Block officials said repeated military and diplomatic negotiations had failed to yield much as the PLA was against returning to the status quo ante of April.

As China continues to violate existing rules of engagement on the LAC, India has resorted to ‘offensive posturing’ in an attempt to seize the initiative and force China back to the negotiating table. The Army’s new strategy is to capture the unoccupied heights in the region to enhance its bargaining power, something Indian military planners have advocated for a long time. They believe that the quid pro quo option will work for India as other tactical offensive measures like trying to dislodge the Chinese from their occupied territories could lead to an escalation.

Colonel (retd) Sanjay Pandey, an officer who had served in the mountains for almost two decades, said in mountain warfare, victory and failure depended on keeping the heights. “If you are dominating the heights, the entire area is yours. We have taken control of the ridgeline in the Chushul area, which allows our forces to dominate the Chushul bowl on our side and the Moldo sector on the Chinese side,” said Pandey. “The entire Moldo garrison of the PLA is under our observation and it has rattled the Chinese. It also gives us a clear line of sight to the Lhasa-Kashgar highway, a critical artery for the PLA’s logistics supply.”

An officer said the mountains of the Himalayas were thick, sharp, high and steep, making any movement impossible, other than sticking to the valleys. India controls a 45km-long dirt track extending from the western bank of Pangong Tso to its southern bank near Chushul. The sector also contains a small plain which is nearly four kilometres wide, where the Indian Army has deployed its artillery guns, howitzers, infantry fighting vehicles and armoured tanks. It offers a clear view of the Spanggur gap, which China used in 1962 to launch its attacks. “Every army in the world is mortally scared of artillery. And, a range of 27km in deserts or in plains for howitzers can go upto 40km in higher altitudes. By capturing these dominating heights, vast areas controlled by China are now under the range of Indian artillery guns,” said Pandey.

“Taking control of these heights allows the Indian Army to destabilise the PLA. But it requires close to two divisions (40,000 troops) to sustain control, with adequate reserves to counterattack,” said an officer. Surviving the winter will be an additional challenge. “If you are short of winter stocks, then your victory over the heights will go in vain.”

With winter about to set in and with no resolution to the crisis in sight, both sides appear to be preparing for the long haul. “At the military level, there is a great deal of mistrust between the two sides,” said Hooda. “In the past, there never was no difference in perception about the LAC in Chushul. We never heard of any transgression in Chushul. Incursions used to take place in other areas of Ladakh like Depsang, the northern bank of Pangong Tso and the Chumar area. So there was no requirement of holding each and every height. But now the Chinese have built up forces in the area. So there is nothing wrong in capturing those heights.”

Hooda said the solution to the ongoing crisis depended on China as it was the PLA which was unwilling to compromise. With its new-found advantage in the heights of Ladakh, the Indian Army is preparing to stay put even in winter, when temperatures often drop below minus 30 degrees Celsius. “Staying in winter will be difficult, but not impossible,” said Hooda. “We continue to stay on the Siachen glacier, which is much more difficult.”