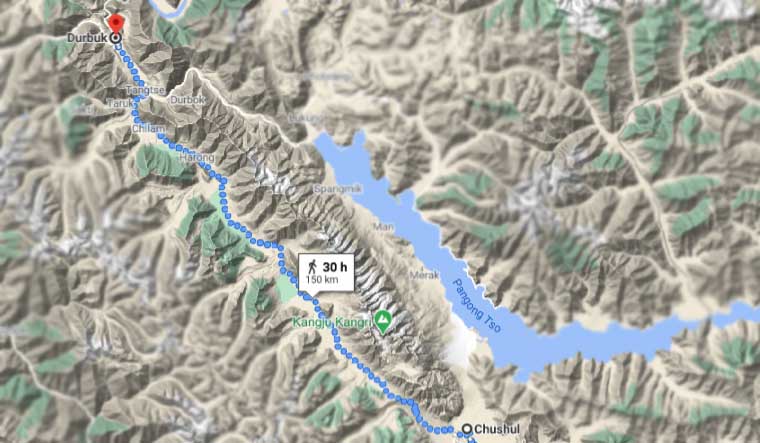 Memories of the 1962 Sino-Indian war, where the nation was dealt a heavy blow by marauding Chinese invaders along the Line of Actual Control (LAC), are still raw in the nation's mind. Equally significant are the stories of valour and bravery—and of an almost inhuman courage—that resonate to this day. The tale of Major Shaitan Singh and his 13 Kumaon regiment, who fought to their last bullet to defend their position at the Rezang La mountain pass, is one such example.

It is exactly this Rezang La in the Chushul sector that China is now vying to open a new front in, and where the Army has currently mobilised troops around. Indian troops have taken control of some heights which were placed in the "grey zone" on the Line of Actual Control. Grey zone is the disputed area, on which both sides make their claims.

By November 1962, in the Sino-Indian War, the Chinese were in a geographical advantage in Ladakh after having overrun numerous border posts between Daulat Beg Oldie and Demchok; Chushul was an Indian post the Army was adamant in securing. The 114 Brigade, reinforced by the 13 Kumaon, were charged with Chushul's defence—crucial forward posts like Gurung Hill and Mugger Hill, and approach passes like Rezang La to its southeast.

It was in a freezing morning on November 18 that the Chinese began with a ‘silent’ attack on Rezang La, advancing wave after wave through nullahs in the area. As written by Major K.C Preval in Indian Army After Independence: “Rezang La was held by C Company of the battalion and had no artillery support. At about 04:00am, a patrol spotted a large body of the Chinese scrambling up the gullies and gave the alarm. Within minutes; every man in the company was at his fire position. Under Shaitan Singh, the company at Rezang La had been brought to a state of absolute readiness. The gullies had been ranged in and all of Singh’s light machine guns and mortars were now trained on them. As the Chinese came within range, the Kumaonis let them have it. Many of them fell; others continued to move up. But with every weapon in C Company firing, the gullies in front of the three platoons were soon full of dead and wounded Chinese.”

The Chinese, who sustained heavy losses, went on an artillery spree. Writes Shiv Kunal Verma in 1962: The War That Wasn't: "The Chinese threw everything at their disposal to blast out Shaitan Singh’s men. Apart from heavy artillery that systematically blew up the stone sangars, the Chinese lined up 132mm rockets, 120mm heavy mortars, 81 and 60mm medium mortars, and 75 and 53mm RCL guns in a direct firing role. Throughout the barrage, not one Kumaonis soldier wavered, each man holding his position until he was killed. As the bombardment intensified, the Chinese threw in their infantry reserve, which joined those who had taken cover when the Kumaonis had opened up. Both No. 7 and No. 8 Platoon had been overrun by 7:30am, but those still alive continued to fight. With two of his platoons all but wiped out, Shaitan Singh along with his company havildar major, Phool Singh, and two other men decided to join up with No. 9 Platoon, some 550 metres away.”

However, Singh was hit in the abdomen by an MMG burst. He ordered his men to stop his evacuation and directed them to join the No. 9 platoon which was still fighting. He passed away alone in the cold, still armed, with his valour earning him the Param Vir Chakra.

Strategic importance of the region

Months after the first confrontations in May, India and China are back to where it all began—the Pangong Tso lake; but this time it is its southern bank that has become the newest flashpoint in the faceoff along the Line of Actual Control in eastern Ladakh. The southern bank is flatter than the northern one, making it easier to traverse. Significantly, control of this bank allows access both to strategic heights like the Rezang La as well as to the Spanggur Gap—one of China’s paths to Leh in the event of a full-scale invasion.

India, which has long held control of the southern bank, as it lies well within its perception of the LAC, has enjoyed its many advantages—a clear view of the northern bank as well as being within reach of Rezang La and Reqin La. Now, with India having taken over the aforementioned strategic heights in a pre-emptive move against Chinese aggression, China may find itself on the backfoot in the region. At the same time, this adds to the pressure for the PLA to retake these strategic heights.

With Rezang La, India gets a clear view of the Spanggur Gap, China’s Moldo Garrison and also of the Spanggur lake. Simply put, the Indian troops are sitting on the dominating heights atop a ridgeline connecting the south bank of Pangong Tso to Spanggur Tso going through Chushul-Rezang La. Reqin La is among the 13 identified routes of ingress by Chinese military in case of a war, as these routes are through natural gaps in mountains. A massive deployment of Indian troops with the support of a regiment of T-90 tanks in range of the vulnerable Spanggur pass at Chushul is positioned to thwart any possible Chinese ingress.

The strategic DSDBO road that has in many ways been the coveted prize of this entire faceoff. From Galwan to Pangong Tso, the DSDBO road could prove a game-changer for any future large-scale Chinese ingress into India. But, an Indian position on Rezang La and Reqin La would greatly impede China’s prospects of taking Chushul via the Spanggur Gap.

But there is no one magic altitude in such terrain that can guarantee India’s safety. Both Black top and Helmet Top hills, which India has reportedly occupied, overlook Chushul. For India, this means securing the defence of the land as well as having the higher ground for Chinese forces coming from the Moldo Garrison too. However, strategic terrains come at a cost. While India has often been on the backfoot in the ongoing faceoff, the capture of these hills—located in a grey zone within an already non-demarcated LAC—could provoke China to response and look for advantages elsewhere.