Bayonets from Lhasa to Ladakh

Which is India’s southernmost point? Most people would say, Kanyakumari. Don’t we say, Kashmir to Kanyakumari?

Quiz buffs and trivia tyrants know it is not. The southernmost point, they will scream, is Indira Point in the Andaman and Nicobar Islands.

OK. Lock kar diya. Now, which is India’s northernmost point? Going by ‘Kashmir to Kanyakumari’, it must be in Kashmir.

No longer. After the statutory coup executed by Narendra Modi and Amit Shah last August, the northernmost region over which the Union of India’s writ runs is Ladakh. Ladakh is now a Union Territory, not part of Kashmir. 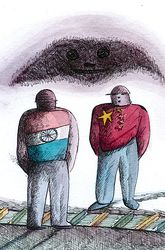 Before anti-Nehruvians and WhatsApp historians take to troll, twitter and digital drivel, let me make it clear. Indira Col is not named after Indira Gandhi. The name was given in honour of Goddess Lakshmi, by Fanny Bullock-Workman, a doughty American who explored Siachen in 1911-12 along with her husband, long before Indira was born to Kamala and Jawaharlal Nehru.

Col means mountain pass or la, as in Nathu La, Chorbat La and Bilafond La. There is even a Colonel’s Col, further west of Indira Col. Turkestan La is sometimes called Colonel’s Col, after the legendary Colonel Francis Younghusband who explored the region in 1889.

All our current strategic games with China started with Younghusband whom Lord Curzon sent with “bayonets to Lhasa” in 1904. Historians and strategic thinkers are still divided over the gains accrued from that mission, but the Chinese still get nightmares about it. They think that India can still invade Tibet as easily as Younghusband did a century ago with just about 3,000 troops. It is another matter that we, in India, don’t think so.

The latest round of the Sino-Indian strategic game is being played in two places in Ladakh, on the banks of Pongong Lake and in the Galwan Valley. (Galwan is named after Gulam Rasool Galwan who guided Younghusband and several other explorers in the late 19th and early 20th century.) The stand-off at Pongong may well be a diversionary tactic; the real threat could be to Galwan Valley and beyond, up to Indira Col. If he gets it, Xi Jinping’s belt-road will roll around Siachen, which the Pakistanis are also coveting, and farther to central Asia.

This is not the first time the Chinese have tried to take Galwan. It was here that Major Shaitan Singh and his 140 brave Kumaonis fell in the battle of Rezang La, the fiercest of 1962.

Tailpiece: In the last instalment of this column, we had met William Moorcroft, who had explored Kailas-Mansarovar and sent he-goats and she-goats separated in two ships to England. According to mountaineer-writer Harish Kapadia, Moorcroft was also the first to explore Siachen.

In 1821 he passed near its snout and acknowledged its existence, writes Kapadia. In 1835, G.T. Vigne approached it from the west trying to reach Bilafond La, but never guessed the existence of a large glacier across the divide. In 1848 Henry Starchy ascended ‘Saichar’ for two miles. In the same year, Dr Thomas Thompson reached the glacier, followed by F. Drew in 1849-50. E.C. Ryall sketched the lower part in 1861.

In 1889, Younghusband approached the area over the Urdok valley, looking for a crossing into the Indian subcontinent. Following a side valley of the Urdok glacier, he reached the foot of Turkestan La. “He felt that this was the main axis of the Karakoram. His explorer’s instincts were correct but, in [the] absence of maps, he was not sure where he was standing. His belief was finally confirmed by Dr T.G. Longstaff in 1909.”