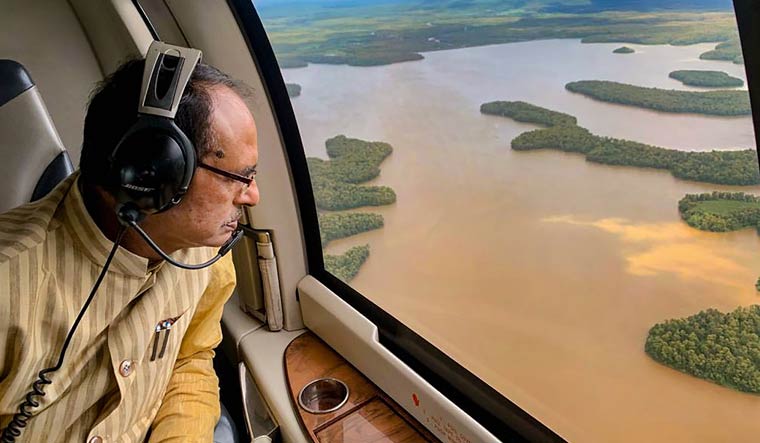 Though flooding in Madhya Pradesh has started receding after rainfall ceded on Monday, it leaves a trail of destruction in its wake, especially in the districts along the banks of the river Narmada—which went into a spate during the past three days.

According to initial estimates, crops have been destroyed in a 7 lakh hectare area in 14 districts of the state, Chief Minister Shivraj Singh Chouhan said on Monday. This, even as estimates of other property loss, including damage and destruction of houses and loss of livestock, are yet to be made. Though official estimates were not given out, reports suggest that at least 10 people were killed in house collapses and after getting drowned in floodwaters.

Chouhan has assured the people, especially farmers, that the government stands with them and will try to compensate for the damage caused due to the flood. Also, all efforts for relief and rehabilitation are being made. He has directed the officials to ensure adequate and safe food, drinking water, sanitary facilities in the relief camps and villages in the affected areas. In addition, directions have been given to the health department to ensure the prevention of water-borne diseases and to restore power supply in the affected areas.

While the flood situation hit a major part of the state in the Narmada belt, ten districts including Dewas, Harda, Sehore, Hoshangabad, Raisen, Vidisha, Balaghat, Seoni, Chhindwara, Khandwa were the most impacted.

The chief minister visited the flood-affected areas in Hoshangabad district using an Army boat on Monday, interacted with the people in the marooned villages and also in other accessible areas.

The capital has received 1113.2 mm of rainfall till now, already more than the total rainfall of 998.6mm rainfall expected during the entire rainy season (June to September).