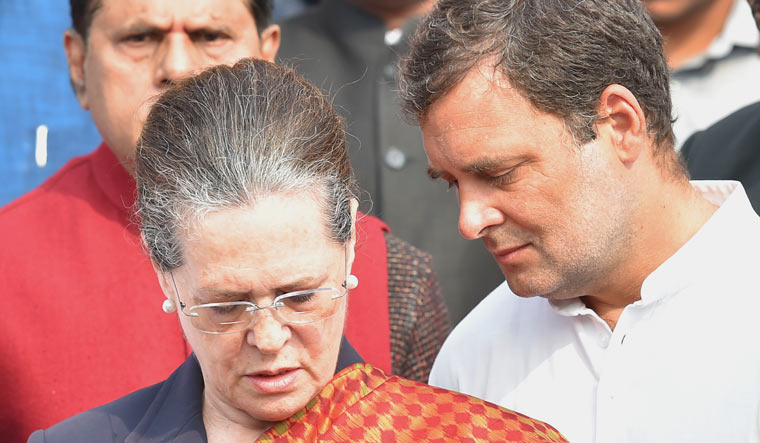 On August 10, 2019, Sonia Gandhi took over as interim chief of the Congress party, following Rahul Gandhi's abrupt decision to quit as the president after the 2019 general election wipeout. Now, one year later, fresh internal rift is threatening to engulf the Congress; more than 20 party leaders had written a letter to the Congress high command, calling for reform and revival at the party's top leadership. The issue is set to be discussed today, at a crucial Congress Working Committee (CWC) meeting, and Sonia has expressed her willingness to step down from her post. However, on the eve of the meet, leaders have openly come out in support of Sonia Gandhi staying on, with some even calling the dissenting letter "BJP-aided coup", exacerbating the tumult even further.

Today's CWC meet will be a much-watched spectacle in that regard. All eyes are now on Sonia. Will she resign, as she did in 1999, after the then leader of opposition in Lok Sabha Sharad Pawar questioned her foreign origins? It should be noted that the resignation was not accepted by the party then, and Pawar, along with P.A. Sangma and Tariq Anwar, quit the Congress and formed the NCP.

What are the arguments from the two sides?

Having a "full time" leadership that is active in the field and "visible" in party offices, dissolution of powers to state units and revamping the CWC in line with the party constitution, were some of the far-reaching suggestions made by 23 senior Congress leaders in the letter to Sonia Gandhi to revive the organisation. The leaders said that over-centralisation of the organisation and micro-management has always proven to be counter-productive, and that uncertainty over the leadership has "demoralised the Congress workers and further weakened the party".

The signatories in the letter included Ghulam Nabi Azad, Anand Sharma, Kapil Sibal, Mukul Wasnik, Manish Tewari, Shashi Tharoor and ex-Haryana CM Bhupinder Singh Hooda. Tharoor put out a cryptic tweet quoting Jawaharlal Nehru that said "we have become prisoners of the past". "Without passion and urge, there is a gradual oozing out of hope and vitality, a settling down on lower levels of existence, a slow merging into non-existence. We have become prisoners of the past and some part of its immobility sticks to us," he tweeted.

They said that the party has witnessed a steady decline reflected in successive electoral verdicts in 2014 and 2019, noting that the reasons were manifold. The letter stated that even after 14 months of the 2019 verdict, the Congress party has not undertaken "honest introspection" to analyse the reasons for its continued decline. It also said that in recent years the institutional process of "merit-based and consensus-backed selection has been disrupted".

Congress leader in Lok Sabha, Adhir Ranjan Chowdhury, came down heavily on his party colleagues who questioned the leadership, claiming it is a "deliberate attempt" to weaken the Congress while asserting that the party is in safe hands of the Gandhi family.

Former Union minister and Congress veteran K.K. Tewary said the letter written was an "organised coup" by the BJP and promotes its agenda of 'Congress-mukt Bharat'. He said the issues raised by the leaders deserved serious scrutiny by the leadership and in the same breath added that the Gandhi family should keep the reins of the party or else it would disintegrate.

Opposing the bid to challenge the Gandhi family leadership, Amarinder Singh said this was not the time to raise such an issue. "The move by these Congress leaders to demand a rehaul of the party at this critical juncture would be detrimental to its interests, and the interests of the nation," he said in a statement. Gehlot said Sonia Gandhi should continue to lead the party and if she has made up her mind, then Rahul Gandhi should come ahead and be the Congress president as the "country faces the biggest challenge to save its democracy". Former Karnataka chief minister Siddaramaiah tweeted, "It is unfortunate that the leadership of Gandhi family is being questioned by few. In these difficult times of undeclared emergency and attack on democracy by BJP, we should collectively strive to strengthen Congress and not weaken it."

Former Rajasthan Congress chief Sachin Pilot on Sunday said most of the party workers would like to see Rahul Gandhi take over as the president of the grand old party. "Mrs Gandhi and Rahul ji have shown what it means to sacrifice for the greater good of the people and the party. It is now time to build consensus and consolidate. Our future is stronger when we're united. Most Congress workers would like to see Rahul ji take over and lead the party," he said in a tweet.

The BJP weighed in on the debate, saying the Congress is "adrift both ideologically and organisationally". General Secretary P. Muralidhar Rao tweeted: "Congress is adrift, both ideologically and organisationally. From India's interests, goals and objectives, BJP had said this long back. Indians have been saying this time and again. Now 24 top notch Congress leaders have acknowledged the same. But there are no halfway solutions (sic)," Rao tweeted.

Bharatiya Janata Party (BJP) spokesperson Sambit Patra took a dig at the Congress over the calls for "sweeping changes in the party, from top to bottom". Ironically, in the Congress, the top is the bottom, he said.