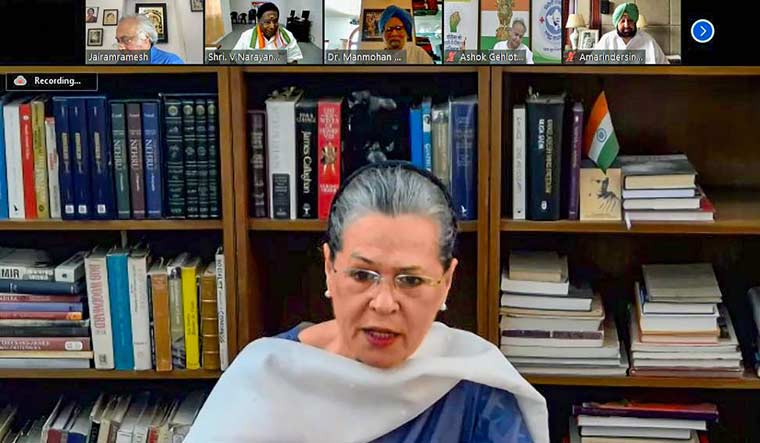 Internal divisions ran rife at the crucial Congress Working Committee (CWC) meeting, after Congress MP Rahul Gandhi criticised an open letter by 23 top Congress leaders who asked the high command to reform and revive the party leadership. He had questioned the timing, criticised the leaders for going public with their grievances and said they were colluding with the BJP. He slammed the leaders for coming out at a time when Sonia Gandhi was unwell and trying to resolve the political crisis in Rajasthan. This drew a sharp reaction from certain sections of the party leaders.

Ghulam Nabi Azad, one of the signatories of the letter, offered to resign if he was found "colluding with the BJP". Other signatories in the letter included Anand Sharma, Kapil Sibal, Mukul Wasnik, Manish Tewari, Shashi Tharoor and ex-Haryana CM Bhupinder Singh Hooda.

Kapil Sibal was even more acerbic in his reaction. "Rahul Gandhi says we are colluding with BJP. Succeeded in Rajasthan High Court defending the Congress Party. Defending party in Manipur to bring down BJP government. Last 30 years have never made a statement in favour of BJP on any issue. Yet we are colluding with the BJP," he tweeted.

Rahul Gandhi says “ we are colluding with BJP “

Defending party in Manipur to bring down BJP Govt.

Yet “ we are colluding with the BJP “!

Congress chief spokesperson Randeep Singh Surjewala responded: "Rahul Gandhi hasn’t said a word of this nature nor alluded to it. Pl don’t be mislead by false media discourse or misinformation being spread. But yes, we all need to work together in fighting the draconian Modi rule rather then fighting & hurting each other & the Congress."

Sh. Rahul Gandhi hasn’t said a word of this nature nor alluded to it.

Pl don’t be mislead by false media discourse or misinformation being spread.

But yes, we all need to work together in fighting the draconian Modi rule rather then fighting & hurting each other & the Congress. https://t.co/x6FvPpe7I1

In the meeting, Sonia Gandhi made it clear that she does not wish to continue as the interim president. Sources told THE WEEK that AICC general secretary K.C. Venugopal read out a letter in which she asked the party to put in place a process to replace her. Leaders like Manmohan Singh and A.K. Antony, however, expressed full confidence in Sonia Gandhi's leadership and asked her to continue. Nearly all of them criticised the open statement by the Congress leaders calling for change in leadership.

The party is currently divided on the leadership matter, with a section demanding collective leadership and another reposing faith in the Gandhi family. Top Congress leaders are deliberating on the issue during the meeting of the party's top decision-making body that is being held virtually.

Massive support poured for the Gandhis on Sunday after the "pro-reform" leaders went public, with Congress chief ministers leading the calls for Sonia Gandhi to stay until Rahul Gandhi takes charge. Almost all Lok Sabha MPs of the party have written to Sonia Gandhi expressing solidarity and urging her to continue in her post or install Rahul Gandhi.

Several state units including Delhi and Rajasthan passed resolutions favouring the leadership of Gandhis after a letter from a section of senior party leaders demanded sweeping reforms in the party, going to the extent of questioning the current CWC's ability to guide the party in the fight against the BJP

Ironically, at least three of the dissenters are themselves part of the same CWC. These include Ghulam Nabi Azad, Anand Sharma and Mukul Wasnik. Several party leaders, while supporting the continuation of Gandhis at the helm, accused those behind the letter of playing into the hands of the BJP and attempting to weaken the party at a time when there was a need to close ranks against the NDA government.

Haryana Congress chief Kumari Selja said: "We stand firmly behind Sonia Gandhi. This is the time to close ranks against the BJP and not the time to show cracks." The dissenting leaders, meanwhile, also said that the party has failed to conduct an honest introspection of its losses in 2014 and 2019, adding that the uncertainty over leadership has demoralised workers.