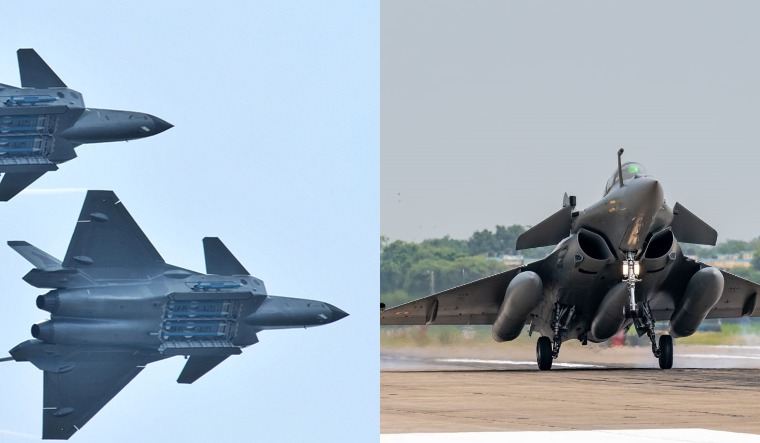 Ever since the five Rafale fighter aircraft departed from Bordeaux in France earlier this week to land in India on Wednesday, reams have been written on the capabilities the 'omni-role' French jet would bring.

Multiple experts in India, including retired personnel of the Indian Air Force, have said the Rafale was superior to China's sole in-service stealth fighter, the J-20. The J-20, which has features to reduce its radar cross-section, made its first flight in 2011. The South China Morning Post, a Hong Kong-based publication, reported this week that China's Air Force has around 60 J-20 fighters in service now.

The J-20 has the capability to carry weapons in internal weapons bays like other stealth aircraft, considered a crucial element in minimising detection by enemy radars. In contrast, the Rafale carries all its weaponry externally on its wings and fuselage.

The J-20 uses canards, small foreplanes on its forward fuselage, which are primarily meant to improve manoeuvrability. However, canards add to an aircraft's radar cross-section. They are not found on the US F-22 and F-35 and the Russian Su-57 stealth fighters. The Rafale incidentally uses canards.

On Thursday, China's state-run Global Times, which has adopted a hawkish tone in security matters, quoted Chinese experts as saying the Rafale "does not stand much of a chance" against the stealth J-20. The Global Times article did not elaborate on why this was so.

Dhanoa was quoted by Hindustan Times as saying, “If the J-20, also called the Mighty Dragon, is indeed a fifth-generation stealth fighter, then why does it have canards while genuine 5th generation fighters such as the US’ F-22, F-35 and Russian fifth generation Su-57 don’t? “I don’t think J-20 is stealthy enough to be called a fifth-generation fighter as the canard increases the radar signature of the fighter and gives away its position to a long-range Meteor missile that the Rafale has,” Dhanoa says.

Dhanoa asked why the J-20 cannot 'supercruise'. Supercruise is the capability of an aircraft to fly over the speed of sound without using afterburner, an engine component into which additional fuel is directly injected to maximise thrust. The capability to supercruise is generally considered to be dependent on both an aircraft's design and its' engine's capabilities. Supercruise helps an aircraft conserve fuel, maximise range and improve average speed, granting enormous benefits in combat. The F-22, Su-57, Su-35, Eurofighter Typhoon, and Rafale all can supercruise to varying degrees.

Dhanoa and other ex-Indian Air Force personnel have drawn attention to the fact the J-20 still uses the Russian AL-31 engine, which incidentally is also used by India’s Su-30MKI fighter. They have claimed the Rafale’s engines are newer and have better reliability than the AL-31.

Some US experts have argued the J-20 is not meant to be an air superiority aircraft designed to shoot down enemy planes like the F-22, but rather a long-range strike aircraft for missions in the Pacific. In support of this argument, they have pointed to the J-20’s large weapons bay and relatively lower level of stealth features.