The inferno is yet to be doused 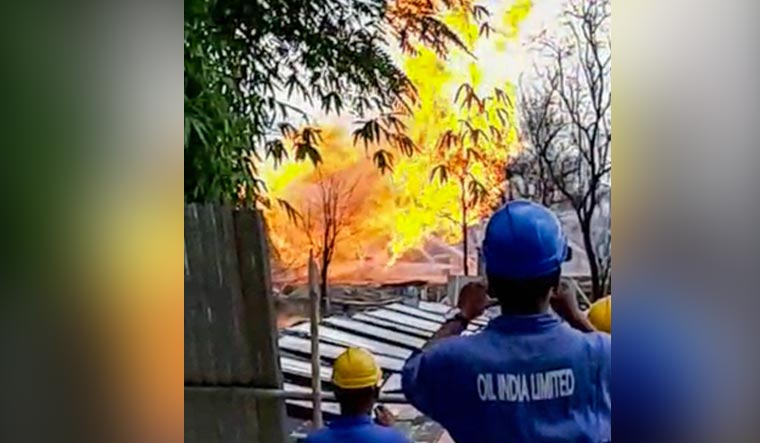 The gas blowout at Oil India Limited's Baghjan oilfield in Assam continued for two months on Monday as experts carried out final preparations for the capping operation.

Well number 5 at Baghjan in Assam's Tinsukia district has been spewing gas uncontrollably since May 27 and a fire broke out at the site on June 9 killing two fire fighters of the company.

The inferno is yet to be doused and three foreign experts who were involved in operations to extinguish the fire received burn injuries on June 22 while removing a spool from the well head.

The final preparation for the capping operation is on and activities for it began at the site since early morning on Monday, a release issued by the PSU said.

As part of it new studs have been transferred to the site for replacing the deformed and damaged ones in the lowermost casing head of the well.

The final preparation for killing operation of the well was also going on with the fluid ready to be transferred to the site, subject to receiving the go-ahead from the core technical team, the release said.

Besides, all six high discharge water pumps are operational at the site for spraying water to the well head during the operation.

The OIL release claimed that the company is facing continued protests and blockades at many of its wells and field locations leading to heavy production losses since June.

Operations were disrupted in 12 oil and five gas wells and the cumulative production loss since May 27 due to bandhs and blockades was estimated at 17,071 mt crude oil, 39.59 MMSCM of natural gas, the release said.

Various assessments and impact studies of the blowout as well as the blaze in villages and nearby forest areas by multiple agencies such as ERM India, TERI, CSIR-NEIST and IIT-Guwahati are on at present.

Surveys for assessment of damage for compensation by the district administration are in progress in both Tinsukia and Doomdooma circles and 2,140 families have been surveyed till July 26, the release added.