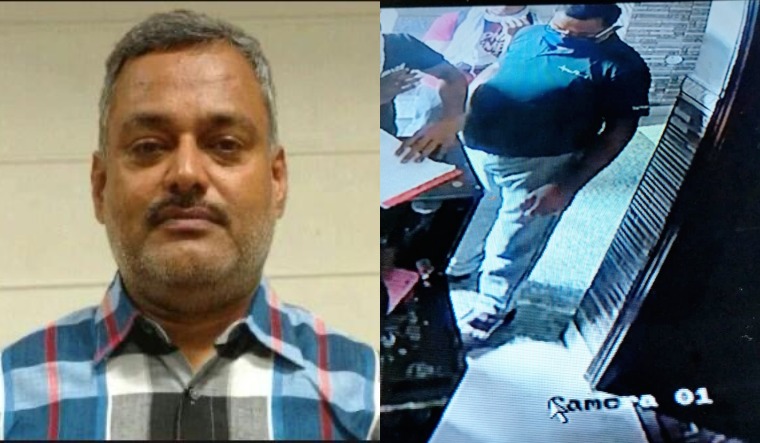 Vikas Dubey, the gangster arrested from Ujjain on Thursday, has been killed in a police encounter on Friday morning around 6.30am. Dubey was being brought by a team of the UP Special task Force (STF) to Lucknow. A convoy of five cars left Jhansi with Dubey. However, there were reports that only three vehicles crossed the toll plaza from the city, and then the toll booth at Jalaun. The three vehicles made it ahead to the outskirts of Kanpur, when the vehicle which carried Dubey overturned. Dubey then reportedly tried to grab the pistol from one STF personnel. There was an exchange of fire in which Dubey was killed and two STF members hurt. Kanpur SP Dinesh Kumar said, "There were four STF constables in the car which overturned. He ran towards the fields. He fired at the police with a gun he had grabbed from the police."

Some media vehicles had attempted to follow the convoy, but were asked to stop by the police. The incident took place in the Bhauti area on the outskirts of Kanpur. This is the same area where Dubey’s associate Prashant Mishra was killed in an encounter on Thursday morning.

Dubey was reportedly shot in the chest and heart with a .9 mm pistol. Though there has been no official statement from the police, one version says that Dubey died on the way to the hospital. The police team with him had reportedly asked him to surrender after he started running from the vehicle. It was raining when the white police SUV carrying Dubey overturned. According to the official version, he tried to run towards the fields by the side of the highway where the encounter took place.

Since Dubey engineered the ambush on the police in his village Bikru of Choubeypur in Kanpur, many details of his close connections with politicians of different political parties, senior police officers and bureaucrats have emerged. There was always apprehension that Dubey would be killed in an encounter as too many uncomfortable details would emerge if he would have lived. Continuous rain at the spot of the accident means that evidence is likely to be destroyed.

The state’s former chief minister Akhilesh Singh Yadav was the first to comment on the encounter. He took to social media to quip, “The vehicle did not overturn, the government was prevented from being overturned”.

Eight police personnel were killed in the wee hours of Friday last week as they attempted to arrest Dubey, a criminal with 60 cases listed against him since 1993. The incident took place in Bikaru village which falls under Kanpur’s Chaubepur block.

Around 1am on Friday, a police team, including a deputy superintendent of police and an inspector surrounded the home of Vikas Dubey, a history sheeter whose many crimes include the murder of a BJP leader Santosh Shukla inside a police station. JCBs had been placed some distance from the house, forcing the team to get down from its vehicles. In the indiscriminate firing that followed, with the criminals having an advantage as they were at a height, eight policemen lost their lives while four were grievously injured. Two criminals were also killed, though the rest, including Dubey, managed to escape. The police action was prompted by a fresh case filed against Dubey for attempt to murder.

A massive hunt had ensued, with special focus on the Nepal borders, as there were intelligence inputs that he might escape to the neighbouring country.

Who is Vikas Dubey?

Vikas Dubey, gang leader and a history-sheeter, faces around 60 criminal cases. His many crimes include the murder of a BJP leader, Santosh Shukla, inside a police station in Shivli in 2001. Two policemen were also killed in the attack on Shukla, who was a minister of state. However, Dubey was acquitted in the murder case of Shukla owing to lack of evidence. Dubey, who has been a former village headman, is believed to be in complete control of many surrounding villages. He is likely to have received a tip-off about the raid.

Vikas Dubey is believed to have connections with all major political parties. He has recruited an army of rural youth to execute crimes ranging from dacoity to murder. He has been a village pradhan and a member of the district panchayat. In 2001, he was accused of murdering Siddheshwar Pandey, assistant manager of an inter-college.