Dubey faces around 60 cases, including murder of BJP leader in police station in 2001 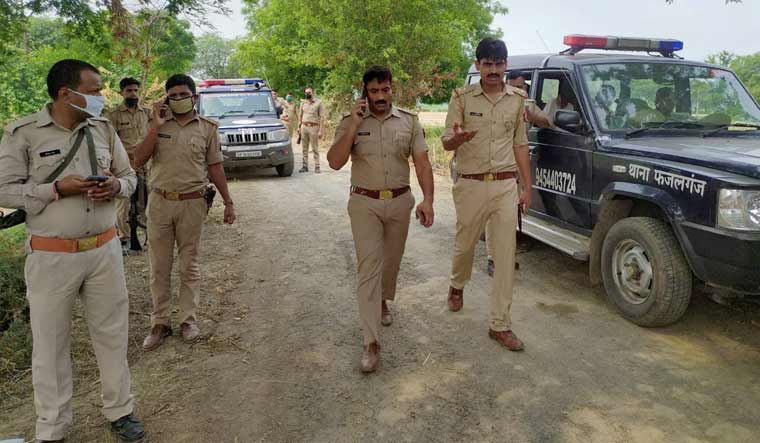 Police personnel at the spot of the encounter in Kanpur | PTI

Uttar Pradesh, and India, woke up to hear the shocking news that eight police personnel had been shot and killed in an encounter with a criminal gang in a village in Kanpur's Chaubepur block in the wee hours of Friday.

The police had gone to the Bikaru village to apprehend Vikas Dubey, the gang leader and a history-sheeter, who faces around 60 criminal cases. Dubey was able to flee after the encounter.

His many crimes include the murder of a BJP leader, Santosh Shukla, inside a police station in Shivli in 2001. Two policemen were also killed in the attack on Shukla, who was a minister of state. However, Dubey was acquitted in the murder case of Shukla owing to lack of evidence.

Dubey, who has been a former village headman, is believed to be in complete control of many surrounding villages. He is likely to have received a tip-off about the raid.

Vikas Dubey is believed to have connections with all major political parties. He has recruited an army of rural youth to execute crimes ranging from dacoity to murder. He has been a village pradhan and a member of the district panchayat. In 2001, he was accused of murdering Siddheshwar Pandey, assistant manager of an inter-college.

His wife is currently a member of the district panchayat.

Priyanka Gandhi Vadra, general secretary of Congress, condemned the killings of the eight policemen in Kanpur. She tweeted, "Law and order in UP have deteriorated. Neither the common man nor the police is safe. The CM has responsibility for law and order. After this horrible incident, he must enforce strict action. There should be no laxity".