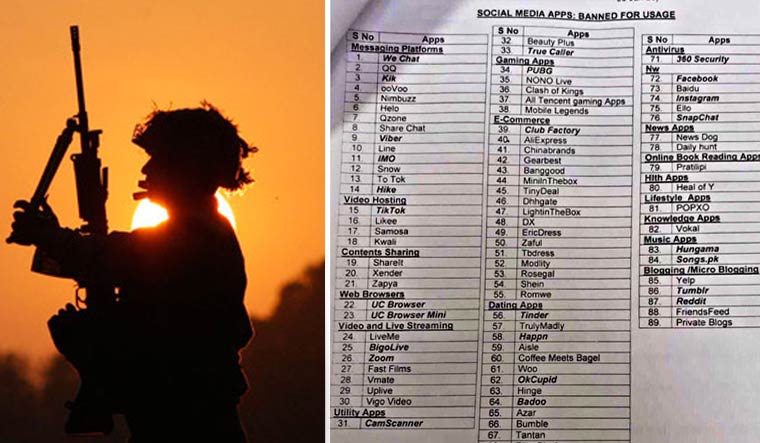 Over a week after the Centre banned 59 apps of Chinese origin or with Chinese links from app stores in India, the Defence Ministry has instructed soldiers and officers of the Indian Army to delete 89 apps from their mobile devices, including news apps like Daily Hunt, dating apps like Tinder, social networking apps like Facebook, TikTok, video-conferencing apps like Zoom and gaming apps like PUBG.

According to Army sources, sensitive information is being leaked via these apps. The Army has said that strict action will be taken against those who do not comply with this order. The list of 89 apps includes many of 59 that were already banned.

A senior official said that this order was issued as soldiers have increasingly been targeted and honey-trapped online, especially by Pakistan's intelligence agency ISI.

The Indian Army claims that Pakistan and China have been using leaked information from these apps to create trouble on the border and Line of Actual Control (LAC).

Earlier, the Army had instructed its soldiers and officials to stay clear of using WhatApp for official purposes. Officers posted on sensitive posts were also asked to delete their Facebook accounts. Carrying smartphones onto bases and dockyards has been prohibited.

It is well known that many apps collect data from their users and, in the absence of a data protection law, the data of Indian users can be sent outside the country. The app ban could help prevent sensitive information about the military from being leaked.