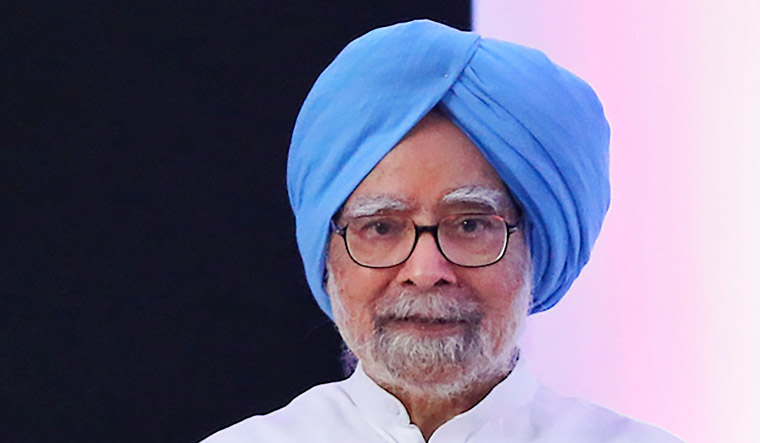 In a scathing counter-attack on Manmohan Singh, BJP president J.P. Nadda said on Monday that he as prime minister "abjectly surrendered" hundreds of square kilometres of India's land to China and presided over 600 incursions made by the neighbouring country between 2010 and 2013.

In a series of tweets after Singh took on the Prime Minister Narendra Modi over his handling of the ongoing stand-off with China, Nadda said the senior Congress leader and his party should stop "insulting" our forces repeatedly and questioning their valour.

They did this post the air strikes and surgical strikes, the BJP president said, asking the Congress to understand the true meaning of national unity, especially in such times.

While accusing the Singh-led UPA government of surrendering huge tracts of India's land to China, Nadda did not give any detail to substantiate the charge.

Incursions from China have been common, and the UPA and then the BJP-led NDA government, which came to power in 2014, have played them down, saying armies of both countries often entered into each other's territory because of their different perceptions about the Line of Actual Control.

Hitting out at Singh, Nadda said, "Dr Manmohan Singh belongs to the same party which: Helplessly surrendered over 43,000 KM of Indian territory to the Chinese! During the UPA years saw abject strategic and territorial surrender without a fight. Time and again belittles our forces".

The BJP president further charged, "One only wishes that Dr. Singh was as worried about Chinese designs when, as PM, he abjectly surrendered hundreds of square kilometres of India's land to China. He presided over 600 incursions made by China between 2010 to 2013!"

In his first remarks on the Ladakh face-off, the former prime minister said Modi must be mindful of the implications of his words and cannot allow China to use them as a vindication of its position.

Noting that disinformation is no substitute for diplomacy or decisive leadership, Singh called upon the prime minister to ensure justice for soldiers who died defending India's territorial integrity.

Sadly, the conduct and actions of top leaders of the Congress party will not make any Indian believe such statements, he added.

Remember, this is the same Congress that always questions and demoralises our armed forces, he said.

"India fully trusts and supports PM Narendra Modi. 130 crore Indians have seen his administrative experience in some of the most testing times, particularly how he has always put the well-being of the nation over and above everything else," he said.

He then added that these strong words on paper fall flat when people see exactly who is vitiating the atmosphere of unity.

“Hope Dr. Singh is able to prevail on his own party at least," he said.

Twenty Indian Army personnel were killed in a clash with Chinese troops in the Galwan Valley in Ladakh on June 15.

The Congress has been attacking the government on Prime Minister Modi's remarks at an all-party meeting that no one has entered Indian territory or captured any military post while referring to the eastern Ladakh standoff.

The government has, however, said attempts are being made to give a "mischievous interpretation" to the prime minister's remarks.