The crackdown on the biggest Naga insurgent group is creating unrest 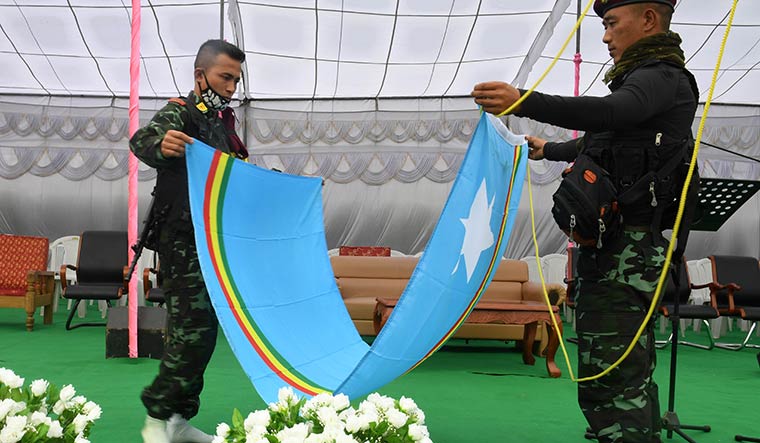 The NIA on Thursday filed a chargesheet against NSCN(IM) leader Alemla Jamir, alias Mary Shimrang alias Atula Tonger, in a terror funding case. Jamir is a cabinet minister in the National Social Council of Nagaland (Isak Muivah) and the wife of former Naga army chief Phunting Shimrang who is learnt to have crossed over  to China last November with two other associates. He is wanted by the National Investigation Agency in another case of crime

Another accused, Masasasong, has been chargesheeted under various sections of the unlawful activities prevention act, Indian Penal Code and  arms act .

The case relates to recovery of Rs 72 lakh worth of cash by the Delhi Police's Special Cell, from the possession of Alemla Jamir .

On December 23, 2019 Jamir was arrested by the security agencies on charges of terror funding. NIA officials said that Alemla Jamir had entered into a criminal conspiracy and directly raised, collected and layered terror funds through a maze of bank accounts, business entities on behalf of terrorist group NSCN (IM).

“Jamir was occupying the post of Kilonser (Cabinet Minister) in the terrorist group. Accused Masasasong Ao and other members of the group helped Alemla in extortion and channelization of terror funds and commit disruptive acts,” said the NIA.

Notably , Icrak Muivah , the wife of NSCN(IM) general secretary and ato kilonser (prime minister) TH Muivah, had also been named by NIA at the time of Alemla’s arrest for allegedly giving “instructions” to her .

However, the chargesheet does not name her yet even as the probe is continuing In the matter.

During investigation, many incriminating articles such as prohibited ammunition, prohibited wildlife articles, documents pertaining to modus operandi of extortion by NSCN (IM), drone, satellite phone, documents connected with land deals and cash amounting to Rs 2.70 crores have been  seized, said the agency .

The latest development may come as a temporary relief for Muivah personally , but the crackdown on the biggest naga insurgent group and its cabinet minister has created unrest as it comes at a time when the negotiations for a final peace settlement are going on.

The outfit has said that accusation against Alemla is a total shock and surprise considering the more than two decades of political dialogue with the NSCN.

“It is only when the government starts respecting its commitment, not otherwise, can the political dialogue move forward in the spirit of “mutual trust and understanding”, a statement Issued by the Ministry of Information & Publicity (MIP) Of Government of the People's Republic of Nagalim (GPRN) had said .