Kerala: Dog with its mouth sealed by tape for 2 weeks rescued 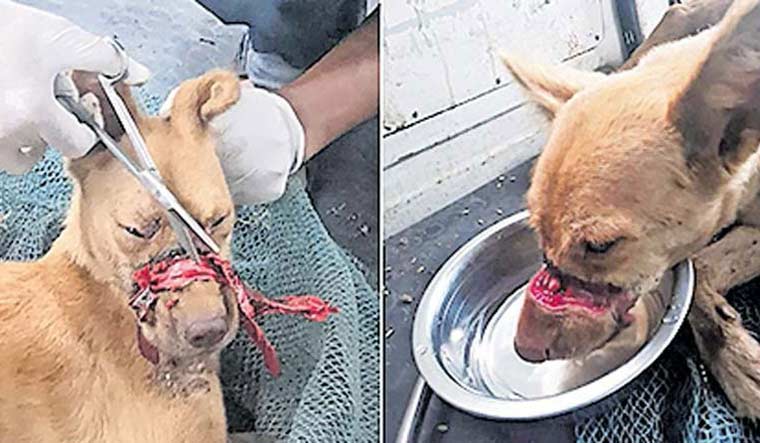 The dog after its rescue | Malayala Manorama

Kerala, and the rest of India, has been shocked since last week after news emerged of a pregnant elephant in Palakkad district dying after it ate a fruit with firecrackers in it.

Even as the outrage over the elephant's killing continues, another shocking incident of cruelty to animals was reported from Kerala on Sunday.

Animal rights activists in Thrissur district rescued a dog that had tape wound tightly around its mouth. According to media reports, two weeks ago, the Thrissur unit of People for Animal Welfare Services (PAWS) received phone calls informing them of a dog with tape wound around its mouth that was wandering around the Ollur locality.

PAWS volunteers searched for the dog for days, but could not find it. Detailing the dog's condition when it was found, Ramachandran, secretary for PAWS in Thrissur, told The News Minute the tape had almost pierced the animal's skin and its nasal bones were visible. “We thought that a single wrap of the tape was made around the dog’s mouth. But when we found the dog, there were several layers of tape, wound so tight that it had almost pierced deep into the skin and the bones around the nose had become visible. As soon as we removed the tape, the dog drank two litres of water," Ramachandran told The News Minute.

Ramachandran said the dog was taken to hospital after being rescued and given antibiotics and is in stable condition. Dogs can survive for weeks without food.

Ramachandran told The News Minute that the dog was "obviously" a pet as it had a collar. He reasoned that the tape may have been wound around its mouth for barking continuously.

PAWS runs a total of 11 camps and takes care of around 2,000 stray dogs. The organisation has rescued thousands of animals, ranging from bulls to kittens, in the past seven years.