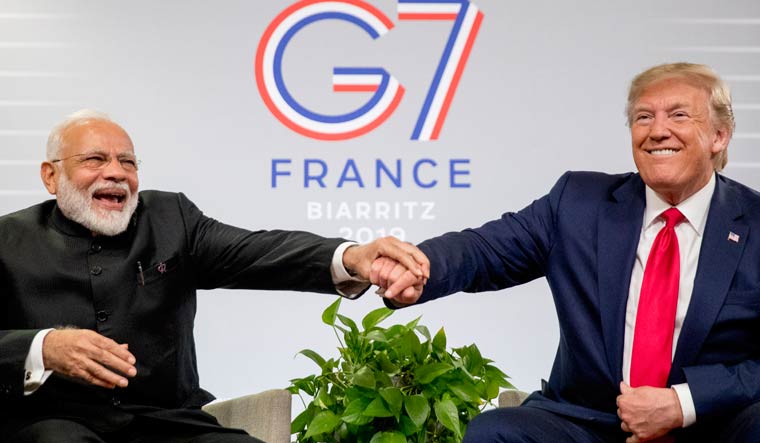 US President Donald Trump has invited Prime Minister Narendra Modi to attend the next G-7 summit in America, extending the invitation over a phone call on Tuesday.

Modi said that India would be happy to work with the US "and other countries to ensure the success of the proposed Summit’’ according to a read-out of the conversation by the ministry of external affairs.

"Had a warm and productive conversation with my friend President @realDonaldTrump. We discussed his plans for the US Presidency of G-7, the COVID-19 pandemic, and many other issues," Modi tweeted.

The richness and depth of India-US consultations will remain an important pillar of the post-COVID global architecture.

Apart from the COVID-19 situation, Modi and Trump also discussed the “situation on the India-China border.’’

The invitation comes amid Trump's stated wish to reform the G-7, which he feels is “outdated’’ to include India, Australia, Russia and South Korea. “President Trump spoke about the US Presidency of the Group of Seven, and conveyed his desire to expand the ambit of the grouping beyond the existing membership, to include other important countries including India,’’ the press release read.

“In this context, he extended an invitation to Prime Minister Modi to attend the next G-7 Summit to be held in USA.’’

For the next G-7 meeting, Trump plans to hold the meeting in person as opposed to the virtual format increasingly being embraced by international groupings. However, so far, the decision has not met with much enthusiasm from the other members.

On Monday, the chairman of the US House foreign relations committee had said that he was "extremely concerned by the ongoing Chinese aggression along the Line of Actual Control on the India-China border”.

“China is demonstrating once again that it is willing to bully its neighbours rather than resolve conflicts according to international law. I strongly urge China to respect norms and use diplomacy and existing mechanisms to resolve its border questions with India,"  Eliot Engel said.

The ongoing protests in the US against the killing of George Floyd also came up during the call. PM Modi “expressed concern” about the  “ongoing civil disturbances in the US" and "conveyed his best wishes for an early resolution of the situation,'' the press release read.

The two leaders also discussed the “need for reform’’ in the WHO. Trump had recently announced that the US would be terminating its relationship with the WHO, after accusing it of being controlled by China and of misleading the world about the early spread of COVID-19.

The phone call comes after the controversy sparked by Trump’s claim on that he had spoken to Prime Minister Modi who he said was not in a “good mood’’ over China. India afterwards strongly denied that such a phone call ever took place. “There has been no recent contact between PM Modi and President Trump,’’ government sources claimed at the time.

The details of that alleged phonecall came a few days after he had offered to mediate to solve the “raging border dispute’’ between the two countries.

The MEA too made it clear in that India was resolve the issue bilaterally. “India is committed to the objective of maintenance of peace and tranquillity in the border areas with China and our armed forces scrupulously follow the consensus reached by our leaders and the guidance provided. At the same time, we remain firm in our resolve to ensure India’s sovereignty and national security,” the Ministry of External Affairs’ Spokesperson Anurag Srivastava had said.

China too, had chosen to turn down Trump, referring to the situation as “stable’’.