Trump made the offer on Twitter in between tweets on Obama, fact-checking and ballots 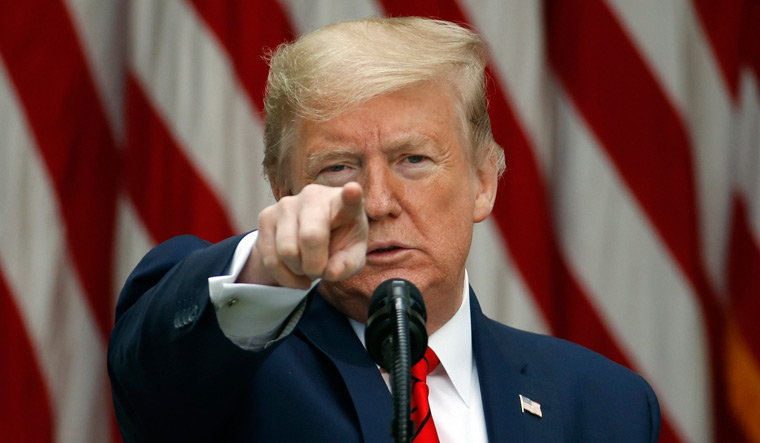 US President Donald Trump has offered to let the US 'mediate' in the 'raging' border dispute between India and China, announcing the same on Twitter.

"We have informed both India and China that the United States is ready, willing and able to mediate or arbitrate their now raging border dispute. Thank you!" Trump tweeted.

We have informed both India and China that the United States is ready, willing and able to mediate or arbitrate their now raging border dispute. Thank you!

Trump slipped the offer to mediate in the ongoing India-China border stand-off in between a series of tweets on the Obama administration, Twitter's fact-checking warnings on his tweets, and mail-in ballots.

The offer comes after weeks of tensions between India and China along the border, with forces from both sides facing off in Eastern Ladakh in several areas along the Line of Actual Control. Both China and India have troops facing off in the Pangong Tso lake and Galwan Valley areas, with neither side showing signs of backing off.

This is not the first time that Trump has offered to mediate in a matter concerning Indian border issues. He had in 2019 made a similar suggestion regarding the Kashmir issue between India and Pakistan, one that India firmly rebuffed by stating that there was no role for a third party in the issue. However, Trump repeated the offer in January.

Trump's offer comes a day after Prime Minister Narendra Modi met with the Chief of Defence Staff, the National Security Advisor and the heads of the services to discuss the issue.

On Wednesday, top Army commanders are expected to meet to deliberate on the issue, alongside other matters like the security situation in Jammu and Kashmir.

Tensions along the border have been high since around 250 Indian and Chinese soldiers in Eastern Ladakh engaged in scuffles on May 5, leaving several injured. A similar incident took place in North Sikkim on May 9. Since then, China has reportedly amassed its forces along its side of the border, while India has been building up border infrastructure—a move that China opposed.

China on Wednesday said the situation was "overall stable and controllable", with a Foreign Ministry spokesman saying that both countries had proper mechanisms and communication channels to resolve these issues through dialogue and consultation.

Foreign Ministry spokesman Zhao Lijian, during a media briefing in Beijing, said that China's position on the border related issues is clear and consistent.

"We have been following the important consensus reached by the two leaders and strictly observing the agreements between the two countries," he said, apparently referring to the directions of Chinese President Xi Jinping and Prime Minister Narendra Modi after their two informal summits, asking the militaries of the two countries to take more confidence building measures to maintain peace and tranquillity along the borders.

The foreign ministry's remarks came a day after President Xi ordered the military to scale up the battle preparedness, visualising the worst-case scenarios and asked it to resolutely defend the country's sovereignty.

Zhao said, "We are committed to safeguarding our territorial sovereignty and security, and safeguarding peace and stability in the border areas. Now the China-India border area situation is overall stable and controllable".

Between the two countries, we have good border related mechanism and communication channels. We are capable of resolving the issues properly though dialogue and consultation," he said, confirming reports that the diplomatic efforts were on to ease the border tensions.

Asked where the talks are taking place, Zhao said the two countries have established border related mechanisms and diplomatic channels.

This includes the communication between border troops and between our diplomatic missions, he added.

The nearly 3,500-km-long LAC is the de-facto border between the two countries.

India has said the Chinese military was hindering normal patrolling by its troops along the LAC in Ladakh and Sikkim and strongly refuted Beijing's contention that the escalating tension between the two armies was triggered by trespassing of Indian forces across the Chinese side.

The Ministry of External Affairs said all Indian activities were carried out on its side of the border, asserting that India has always taken a very responsible approach towards border management. At the same time, it said, India was deeply committed to protect its sovereignty and security.

"Any suggestion that Indian troops had undertaken activity across the LAC in the Western sector or the Sikkim sector is not accurate. Indian troops are fully familiar with the alignment of the Line of Actual Control in the India-China border areas and abide by it scrupulously," MEA Spokesperson Anurag Srivastava said at an online media briefing last week.