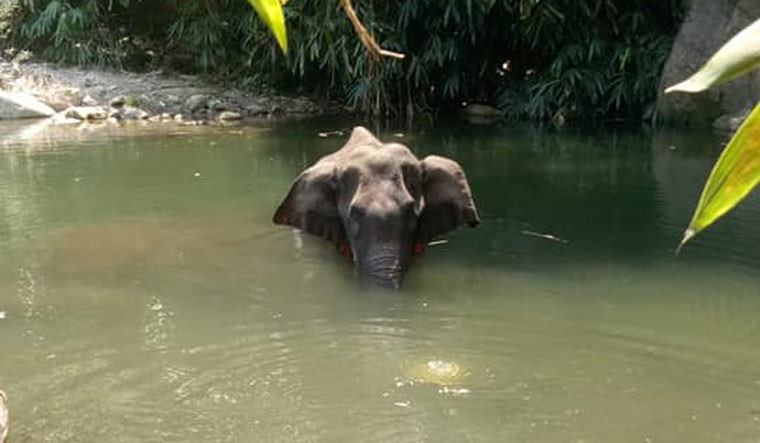 In a heart-wrenching incident, a pregnant wild elephant met with a tragic death in Kerala after she ate a pineapple filled with firecrackers. The 15-year-old elephant belonging to the Silent Valley National Park in Palakkad died in Velliyar river in Malappuram district in a standing position with its trunk in the water on May 27.

The fruits filled with crackers are usually used by locals to protect their fields against wild boars.

“When the pineapple she ate exploded, she must have been shocked not thinking about herself, but about the child she was going to give birth to in 18 to 20 months," wrote forest officer Mohan Krishnan in a Facebook post which brought the incident to light. Krishnan was part of the Rapid Response Team to rescue the elephant.

Under excruciating pain, the pachyderm walked around the village, but she neither created any havoc nor did she harm even a single human being. She walked upto the Velliyar river and stood in the deep water.

The forest officials brought two kumki elephants—Surendran and Neelankandan—to lift the injured elephant from the river.

“It seems she had a sixth sense. She didn't allow us to do anything and met her death at 4 pm on May 27 in a standing position,” Krishnan said in his emotional post.

The body of the elephant was taken back to the forest where the officials conducted her funeral.