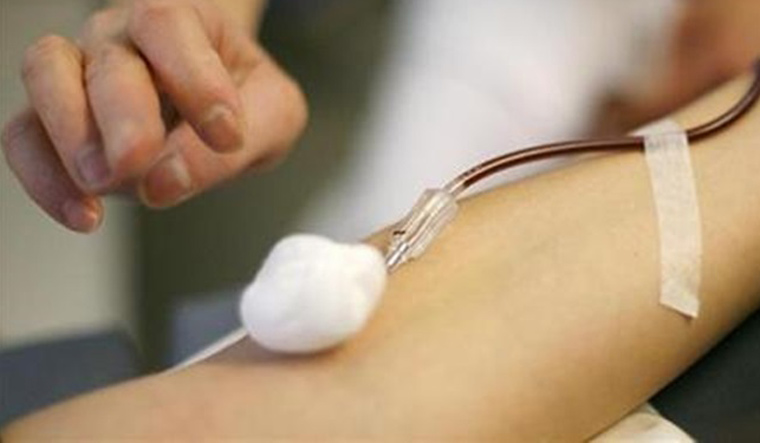 Two Central Reserve Police Force (CRPF) personnel deployed in Jharkhand have donated blood to save the life of a Maoist, apprehended in an injured condition after an encounter with the force, on "humanitarian" grounds, officials said on Friday.

A team led by the paramilitary forces' 60th battalion and state police killed three Naxals and apprehended two on Thursday after a gun battle in the forests of the Manmaru-Tebo area in Jharkhand's West Singhbhum district.

No security forces personnel was injured.

CRPF constables Om Prakash Yadav and Sandeep Kumar volunteered to donate blood on Thursday evening to one of the injured Maoists, Manoj Hessa, after the doctors at a Tatanagar hospital informed their commanders that the injured person whom they had got admitted had lost a lot of blood.

"I know they train guns at us...we also undertake combat missions against them...but above everything else is humanity. I just did my part as a human being," Yadav told PTI over the phone from Jharkhand.

The 36-year-old jawan, who joined the country's largest paramilitary force, which has about 3.25 lakh personnel in its ranks, in 2006, said he had donated blood in the past as well as he believes it is the most precious life-saving gift one can give to another person.

His colleague, 30-year-old Sandeep Kumar, is the carpenter of the unit and shares the same thought.

"We enter into combat to shoot, kill the adversary as part of our duty for the nation. But saving a life is also our duty," he said.

A native of Rajasthan's Jhunjhunu district, Kumar joined the CRPF in 2010.

"The personnel did what they have been trained for and that is dedication to duty and protection of human lives.

"We are proud of the two jawans who donated blood to an injured Naxal in Jharkhand," CRPF spokesperson Deputy Inspector General Moses Dhinakaran said in Delhi.

Three Naxals, including a female, were killed in the operation and an AK-47 and a .303-calibre rifle seized.