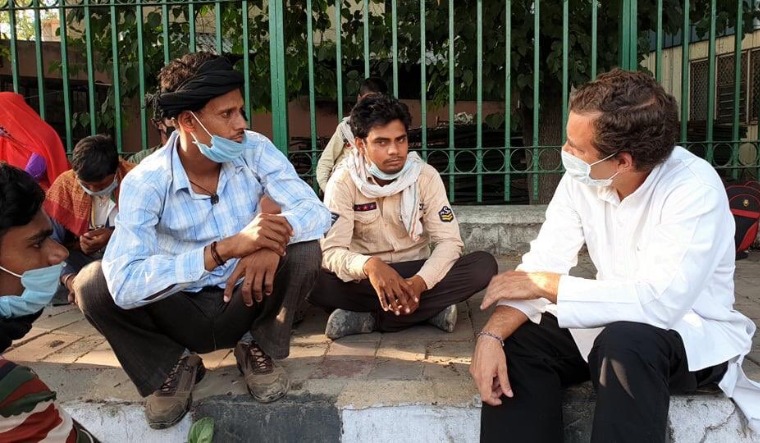 “Do you want me to help you reach home?”Congress leader Rahul Gandhi asks a group of migrants walking from Haryana to Jhansi in Uttar Pradesh. The workers, who have walked overnight and are taking a break on a footpath on Mathura Road in Delhi, get emotional as they say all that they want is to be back home in their village.

Cars are soon arranged, and the migrant workers and their kin are on their way home. This was the culmination of a meeting Rahul Gandhi had with the labourers and their family members last week. The conversation he had with them—which brought out their difficulties during the lockdown, their disappointment with the government and the reasons why they decided to start walking home—has been made into a documentary that was released on YouTube on Saturday.

The documentary begins with scenes of migrant workers trudging to their hometowns, struggling for food and water and getting beaten up by policemen. Gandhi, in a voiceover as the visuals play out, talks about how the COVID-19 pandemic has hurt the migrants the most. He says he wants to provide a glimpse into the fears of these people, their aspirations and what they think the future holds for them.

Rahul Gandhi's conversation with the migrant workers on their way home in Jhansi is shown in detail. The Congress leader, seated on the footpath with the group that includes women and children, asks them about the difficulties that they have faced during the lockdown and seeks to know why they took the decision to return to their village.

The labourers, who worked at a construction site in Haryana, tell him that they have been out of work for two months, and are left with no food or money. “The privileged have no problems. We have not eaten for the last three days. Our children have not eaten,” says Mahesh Kumar, one of the workers.

They say it is primarily the uncertainty with regard to the future that has made them decide on going back to their village. “We don't know what will happen in the fourth extension of the lockdown. What if there is a further extension? We are going back to save our lives,” says another worker.

The workers tell Gandhi that had they been given four days' notice before the imposition of lockdown, they would have used the time to go back home.

“Notebandi was announced all of a sudden. The lockdown also happened suddenly. The government does not think of the poor,” says one of the workers.

Gandhi asks them whether the government has put any money into their accounts, and they say they have got nothing. They further say that Rs 500, which the Centre announced it would transfer into the accounts of the poor, is not enough to survive.

The documentary has visuals of the migrants after they have reached their home in Jhansi, and they thank Gandhi for arranging for them to be sent to their village.

In the end, Rahul Gandhi says in a voiceover that the government should immediately give Rs 7,500 to the 13 crore needy families through direct cash transfer.

The Congress has been seeking to project Gandhi as a leader empathetic to the difficulties and aspirations of the migrant workers and has charged the Narendra Modi government of pushing them into a humanitarian crisis. The documentary is an effort to amplify Gandhi's articulation on the issue of migrant workers and highlight issues such as the government not giving them enough notice to go back home before the lockdown was imposed and then not caring about their needs during the restrictions and not making arrangements for them to reach their native villages.