With 6 dead, how a religious gathering in Delhi sparked mass COVID-19 outbreak fears

Over 150 have been quarantined, and Nizamuddin West has now been virtually sealed 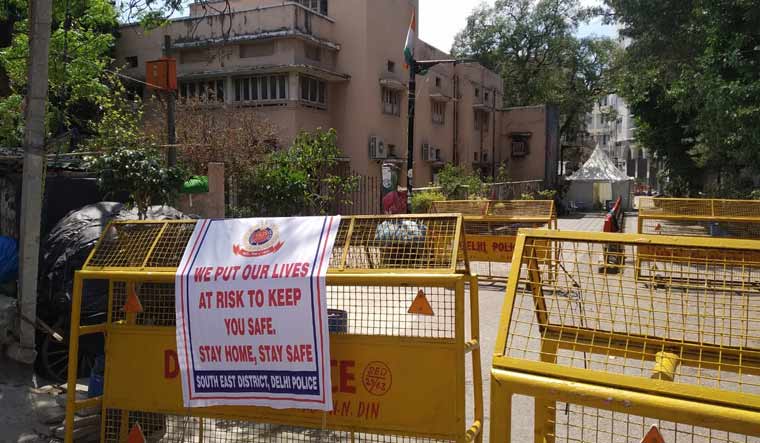 Nizamuddin area was cordoned off by Delhi Police | via Twitter

The first COVID-19 casualty from Jammu and Kashmir was reported on March 26. It was a 65-year-old man, who passed away in the early hours of Thursday at the Chest Disease Hospital in Srinagar. He had a medical history of diabetes, hypertension and obesity. The man was a resident of Hyderpora in Srinagar, and had recently traveled to New Delhi, Uttar Pradesh, Jammu, Indonesia and Malasiya with an Islamic organisation and one of the biggest in Asia. As news agencies later reported, that was when the alarm bells started to ring.

From March 1-15, over 2,000 delegates, including those from countries like Indonesia and Malaysia, attended a religious gathering organised by the Islamic organisation at Markaz in Delhi's Nizamuddin. Now, six people who attended the congregation have died, and over 200 have been kept in isolation in hospitals. "Coronavirus has spread among some of those who attended a religious prayer meeting from March 13 to 15 at Markaz in Nizamuddin area in Delhi," according to Delhi government official press release. "Among those who attended were some persons from Telangana."

Now, the south Delhi neighbourhood has been virtually sealed following fears that many may have contracted COVID-19. Police and paramilitary personnel cordoned off a major area in Nizamuddin West in south Delhi while over 150 people have been kept in isolation in hospitals. Delhi Police and CRPF officials and medical teams reached the locality late on Sunday night after reports that a large number of people were showing symptoms of the disease. At least 100 people were also tested for the disease. The results are expected today.

The joint Delhi Police-CRPF-medical team has been checking people and shifting them to designated hospitals for quarantining. According to officials, as quoted by PTI, there were several smaller congregations culminating in the big meeting at the headquarters of the organisation, which shares its wall with the Nizamuddin police station and is adjacent to the famous shrine of Khwaja Nizamuddin Auliya.

The congregation was attended by preachers from several countries, including Saudi Arabia, Indonesia, Dubai, Uzbekistan and Malaysia. About 600 Indians from different parts of the country also participated. The Indian members of the group left on trains and flights. Contacts of a few cases that were identified in several parts of the country were traced to the congregation, the officials said. Buses have been kept in readiness for shifting people to quarantine centres. Hotels in the area that had housed people from the congregation have been sealed.

Chief Minister Arvind Kejriwal ordered an FIR against the cleric who was leading the congregation, sources said. Responding to a question on Nizamuddin quarantine,  Joint Secretary in the ministry of health Lav Agarwal said authorities initiate action as per the protocol wherever larger number of cases get reported. "Be it in Nizamuddin or any part of the country, our teams go and take action as part of the containment strategy, he said, adding the government was focusing on hotspots from where larger number of cases are being reported and working in tandem with states to implement rigorous contact-tracing, community surveillance and other containment strategies to break the chain of transmission."

Highest COVID-19 cases in a day

On Tuesday, the government reported 227 fresh cases of infection nationwide, the highest for a day. The total tally is now 1,251 While the Union Health Ministry maintained the deadly virus was still in the local transmission stage in India and yet to move to the community transmission phase, the Supreme Court cautioned that fear and panic are becoming a bigger problem than the coronavirus.

The government also said there was no immediate plan to extend the 21-day lockdown period, which entered its sixth day on Monday, while the Indian Army dismissed as "fake" social media posts about a possible emergency declaration next month.

In its latest update, the Union Home Ministry said the dealth toll due to COVID-19 has risen to 32 and the number of total positive cases to 1,251 as on Monday 9.30pm, up from 1,024 positive cases and 27 deaths as on Sunday evening. While there are more than 1,100 active cases, nearly 100 have been cured.

The Union Health Ministry in its daily briefing said the COVID-19 is still in local transmission stage in India and it took 12 days for cases of infection to rise from 100 to 1,000 at a rate of increase slower than some of the developed countries. Joint Secretary in the Ministry of Health, Lav Agarwal, asserted there has been no community transmission as yet. Earlier on Sunday, an SOP (standard operating procedure) issued by the Health Ministry had referred to the current phase of COVID-19 pandemic in India as "local transmission and limited community transmission".