How are different states reacting to it? 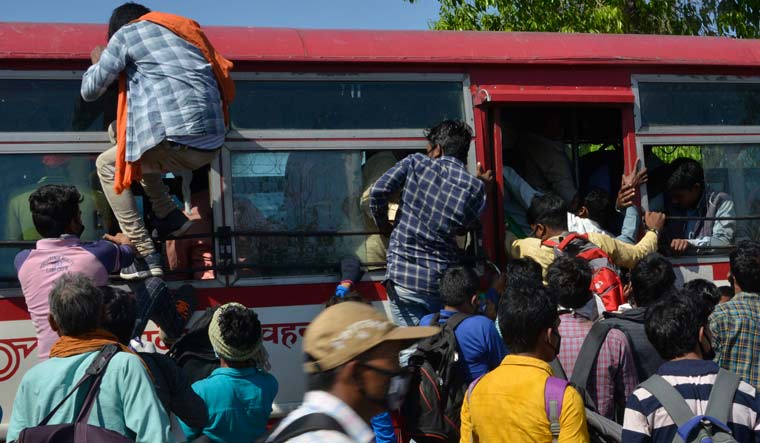 Migrant workers are trying to board a bus at Anand Vihar bus station in Delhi | Arvind K. Jain

After a national lockdown was imposed owing to the coronavirus, migrant labourers from states like Uttar Pradesh and Bihar, who worked in areas like Mumbai and the national capital, found themselves in the literal deep end of affairs. Left with no means to earn a living, they were forced to undertake long journeys on foot to their far-flung homes in the absence of any means of transport. Most of them had to walk hundreds of kilometres to reach their hometown; it was only a day back that the Uttar Pradesh government announced that it has arranged 1,000 buses to ferry migrant labourers stranded at the border districts.

The crisis reached its zenith on Saturday when chaos, confusion and a stampede-like situation prevailed at the Delhi-Ghaziabad border. There, thousands of migrant workers fought amongst themselves to get seats on the limited number of buses the Uttar Pradesh administration operated. Thousands of daily wagers and labourers from Delhi, Haryana and even Punjab reached Anand Vihar, Ghazipur and Ghaziabad's Lal Kuan area after taking arduous treks of many kilometers on foot to take buses to their respective native places. But, as numerous images showed, the people, in hordes, far outnumbered the seats on the buses, resulting in many of them travelling on rooftops after every inch inside was crammed with passengers and their luggage.

Delhi Chief Minister Arvind Kejriwal on Saturday appealed to migrant workers leaving the national capital to stay back, even as he said that his government has arranged for buses to transport them. Deputy CM Manish Sisodia also made a similar appeal, while stating that the Delhi government has deployed 100 buses for people attempting to walk home from the city. "The governments of UP and Delhi have arranged buses. Still, I appeal all to remain where they are. We have made arrangements for stay and food. Please stay at home. Do not go back to your village, otherwise the objective of the lockdown will fail," Kejriwal said in a Hindi tweet.

'Social distancing' and boundaries were thrown into the air as they squeezed into the buses. Some wore face masks but most had handkerchiefs tied over their noses and mouths to protect them from the infection. There were around 10,000 to 15,000 people at Anand Vihar at 9.30pm on Saturday, Deputy Commissioner of Police (Shahdara) Dinesh Kumar Gupta said. "There are around 60 to 70 buses. The passengers have been standing in queues and boarding them. Till midnight, around 500 more buses will reach Delhi," Gupta said.

Delhi's Transport Minister Kailash Gahlot said 570 buses were deployed to drop migrant workers at the UP border. "Delhi government wants everyone to stay in Delhi, but arrangements are being made for those trying to go to UP. Delhi government's 570 buses will drop them at UP border. I would be happy if UP government sends buses for them," Gahlot tweeted.

Political blamegame over the crisis

The BJP on Saturday attacked the AAP government over the migrant outflow. "Migrant workers tell on camera that they were told that buses will be there at Anand Vihar. DTC buses drop them to Anand Vihar. Some forces want India to fail when India fights corona. Nation will not forgive them," BJP general secretary (organisation) B.L. Santhosh said. Noting that the National Capital Region has more than 100 positive cases, he said it is a 'health red zone" and still about half-a-lakh migrant workers are being "encouraged" to move out without being given shelter and food. It is a criminal act, he said. BJP's Amit Malviya tweeted that Chief Minister Arvind Kejriwal had won the Delhi assembly elections on the support of these migrants by "deceiving" them in the name of free water and electricity but has now left them to their fate in this crisis.

Delhi Deputy Chief Minister Manish Sisodia accused the BJP of doing "petty politics" over the coronavirus pandemic. The sharp reaction from Sisodia came after reports that a huge crowd of migrant workers were at the Anand Vihar area, bordering Ghaziabad in Uttar Pradesh, to catch buses to their home states. In a series of tweets, Sisodia said people at Delhi's borders were not only those from the city, but also from Rajsthan, Haryana and Punjab. "I am very sad that BJP leaders have stepped to petty politics over the coronavirus epidemic. The Yogi Adityanath government has charged that (Chief Minister) Arvind Kejriwal has got power and water supply cut due to which people are leaving Delhi," he said. It is time to seriously work together to save the country instead of doing "cheap politics", Sisodia said in one of the tweets

Maharashtra Chief Minister Uddhav Thackeray asked migrant workers not to leave the state. Thousands of migrant labourers are trying to return home by any means they can find ever since lockdown was imposed across the country to contain the coronavirus outbreak. Thackeray, in a televised address, assured migrant labourers that the state government will take care of their food and accomodation needs as well as their well-being. "Stay at your place of work, do not leave the state," he said. "If needed, the workers should approach the tehsildar, district collector or local self-government bodies for help," the chief minister said.

Rajasthan Transport Minister Pratap Singh Khachariyawas told media that roadways buses will be pressed into service to transport migrant workers and their families stranded in the state due to the country-wide lockdown to check the spread of coronavirus. He said people from other states who have entered Rajasthan need to be taken to their destination so that there is no risk of COVID-19 infection. Khachariyawas said he has instructed the roadways to keep 20 fully sanitised buses ready at depots across the state at all times.

Bihar Chief Minister Nitish Kumar said sending stranded migrant workers to their home states would defeat the purpose of the lockdown and could increase the spread of the coronavirus. He said a better course of action would be to provide food and shelter to such people, wherever they are, by setting up special camps. Kumar ordered officials to set up relief camps in districts in Bihar that share borders with adjoining states like Uttar Pradesh and Jharkhand, and also Nepal. "Arrangement of buses could bring respite to people who have been enduring problems after the nationwide lockdown came into force. But we must be mindful of the danger. If just one passenger in any of these buses happens to be carrying the virus, it could spread," the chief minister said.