In a first in the country, tunnels have been bored under the Hooghly river 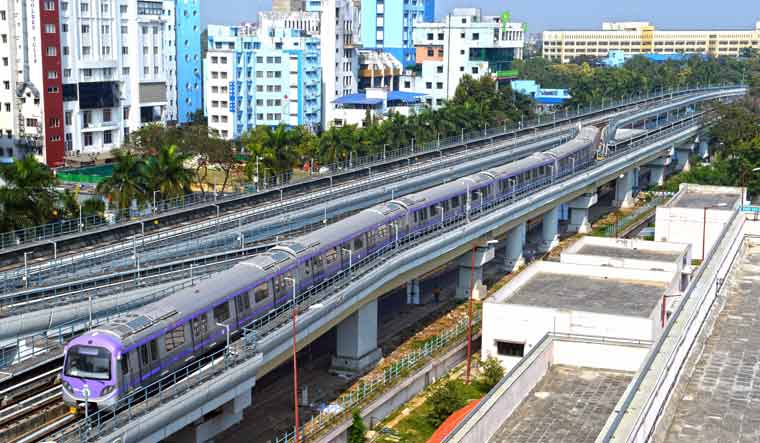 The railway minister will flag off the inaugural run on the 4.88-km section | Salil Bera

The first phase of the East West Metro corridor connecting Sector V with Salt Lake Stadium in the city will be inaugurated on Thursday by Railway Minister Piyush Goyal, an official said in Kolkata.

The railway minister will flag off the inaugural run on the 4.88-km section of the much-awaited metro corridor at 5pm on Thursday, a Metro official said on Wednesday. Regular commercial services connecting Sector V, Karunamoyee, Central Park, City Centre, Bengal Chemical and Salt Lake Stadium stations will commence on Friday, the official said.

Poised to be an engineering marvel upon completion, the East West Metro corridor between Sector V and Howrah Maidan stations comprises both elevated viaduct covering 5.8 km and an underground section of 10.8 km.

In a first in the country, tunnels have been bored under the Hooghly river to connect the twin cities of Kolkata and Howrah through the rapid transit system.The first phase of the service will be on the overground viaduct section.

The metro project suffered an unexpected hurdle last year when an aquifer burst during tunnelling work, leading to huge ground settlement and the collapse of several buildings in the Bowbazar area of central Kolkata. Completion of the entire project, which was scheduled in June 2021, may get delayed by a year owing to the incident, according to a senior official of the Kolkata Metro Rail Corporation Limited (KMRCL).

Resumption of the tunnelling work using tunnel boring machines, which had been halted since the incident on August 31 last year, got a green light from the Calcutta High Court on Tuesday.

Accepting a report by IIT-Madras, the court had directed the KMRCL, the executing agency for the project, to restart work between Esplanade and Sealdah stations in Bowbazar area, in consultation with the institute.

The 16.6-km-long rapid transit system, connecting the twin cities of Kolkata and Howrah, may now be completed by mid-2022, he said. Work on 9.8 km of the 10.9-km-long underground section of the corridor has been completed and only a little more than a kilometre is remaining, the official said. The underground section of the metro corridor passes through some of Kolkata's most-congested areas, dotted with century-old buildings, several of which are in a dilapidated condition.