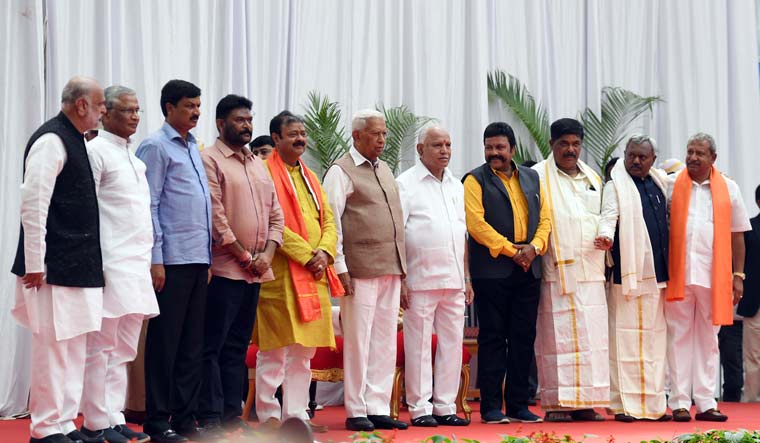 The newly inducted ministers of the B.S. Yediyurappa government after their swearing-in | Bhanu Prakash Chandra

The much-awaited expansion of the B.S. Yediyurappa cabinet in Karnataka saw 10 BJP MLAs, all defectors from the Congress and the JD(S), being sworn in as ministers on Thursday. All these MLAs had won bypolls held on December 5.

A last-minute decision of the BJP leadership to induct only the party-hoppers, leaving out old-timers and loyalists of the saffron party, has caused disappointment.

Chief Minister B.S. Yediyurappa seems to have kept his promise of “rewarding” the defectors with a cabinet berth for their “sacrifice”. These defectors by tendering resignations en masse had toppled the JD(S)-Congress coalition government in July last year.

Two months after the Assembly bypolls, the second phase of the cabinet expansion now leaves only six vacancies (berths) in the cabinet with a sanctioned strength of 34. The first expansion had inducted 18 ministers (including the chief minister).

This time, Yediyurappa has inducted eight first-time ministers. Anand Singh, who was the tourism minister in the previous Yediyurappa cabinet in 2008, is a second-time minister. Ramesh Jarkiholi has become the minister for the third time after brief stints in both the Siddaramaiah and H.D. Kumaraswamy cabinets.

Athani MLA Mahesh Kumatalli, is the only ‘defector’ MLA to be left out of the cabinet as the Belagavi region is already represented by deputy chief minister and fellow Lingayat leader Laxman Savadi in the cabinet. Interestingly, Savadi had lost the Athani seat to Kumathalli in the May 2018 Assembly polls. The BJP fielded party-hopper Kumathalli in the bypolls and has nominated Savadi to the Upper House of the state legislature.

Last July, 17 MLAs had resigned, causing the collapse of the JD(S)-Congress coalition government. Subsequently, these MLAs were disqualified by then speaker Ramesh Kumar for “anti-party activities”. After the Supreme Court’s nod to these disqualified MLAs to contest the December 5 bypolls, the BJP gave tickets to only 13 rebels to contest the bypolls, while denying tickets to former ministers—R. Shankar (Ranebennur) and Roshan Baig (Shivajinagar).

Bypolls to seats held by the rebels R. Munirathna (RR Nagar) and Pratap Gouda Patil (Maski) were withheld owing to complaints of electoral malpractices during the May 2018 Assembly elections. The bypolls saw only 11 party-hoppers retain their seats, as A.H. Vishwanath (Hunsur) and M.T.B. Nagaraj (Hoskote) lost.

With the induction of the newly elected MLAs into the cabinet, Yediyurappa has tried to bring more stability to his government. But the discontent is brewing within the BJP inner circle as party loyalists and senior legislators like Umesh Katti and Arvind Limbavali have been sidelined.

A formula of inducting 10 new entrants along with three core BJP legislators was being floated, but at the last minute, the plan was dropped.

Sources attribute the sudden change of plan to the growing opposition to inducting former minister and ex-MLA of Channapatna C.P. Yogeshwara. Yediyurappa was hoping to give Yogeshwara, a defeated MLA, a cabinet berth to 'reward' him for his role in 'Operation Kamala' (poaching of rebels from opposition parties) that installed a BJP government in the state. The BJP legislators and cabinet aspirants registered protest against inducting Yogeshwara, stating election winners were being given a raw deal.

While the state is yet to get a full-fledged cabinet with six vacancies remaining, insiders say the vacant slots are a carrot dangled before the aspirants to keep dissent under check.