Kerala leads the way in anti-CAA protests on Republic Day

A 620-km human chain was formed in Kerala, demanding withdrawal of CAA 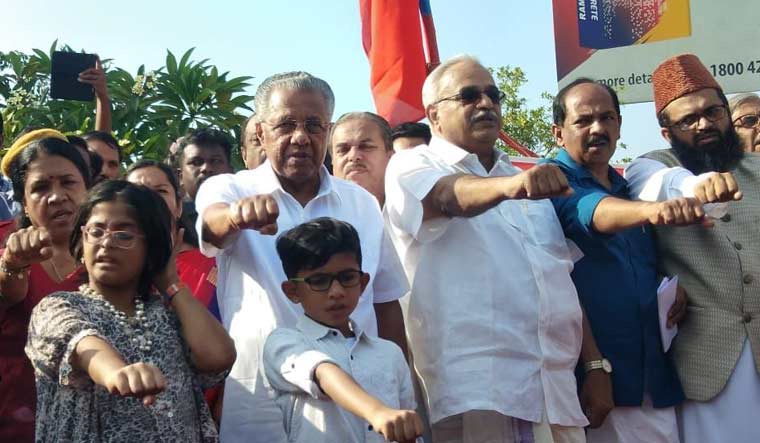 Kerala has been at the forefront of anti-Citizenship (Amendment) Act protests, as far as states are concerned. It was the first state to pass a resolution demanding the scrapping of the controversial law, and also the first to move the Supreme Court against CAA.

On Republic Day today, Kerala again showed the way for all the states which are protesting against the CAA, by forming a 620km human chain demanding the withdrawal of the CAA. In a first, the national flag was hoisted and reading out the Preamble of the Constitution was held in churches and mosques in the state to register their protest against the controversial Act.

ALSO READ: CAA not a measure in isolation: Interview with Pinarayi Vijayan

Mosques under the Kerala State Wakf Board and churches under Kerala Regional Latin Catholic Council (KRLCC) hoisted the national flag and read out the Preamble on Sunday, which marked the country’s 71st Republic Day. At the churches under KRLCC, a circular was also read out and an oath taken for the protection of the Constitution.

The ruling LDF organised the human chain from Kasaragod in north Kerala to Kaliyakkavilai in the southernmost part of the state. Chief Minister Pinarayi Vijayan and CPI leader Kanam Rajendran joined the protest in Thiruvananthapuram.

The LDF claimed that around 60 to 70 lakh people participated in the human chain. The human chain was formed at 4pm, following which the Preamble of the Constitution was read out.

Later, an oath was taken to protect the Constitution from the "attempts of the Central government" to destroy it.

Senior CPI(M) leader S. Ramachandran Pillai was the first link of the 620-km-long human chain at Kasaragod, while M.A. Baby was the last link at Kaliyakkavilai. Several prominent personalities from all walks of life participated in the human chain.

ALSO READ: Congress buys copy of Constitution from Amazon, gifts to Modi with a message

In West Bengal, too, hundreds of people from different communities formed an 11km-long human chain from the north to the south of Kolkata today "to uphold unity and protect the Constitution". 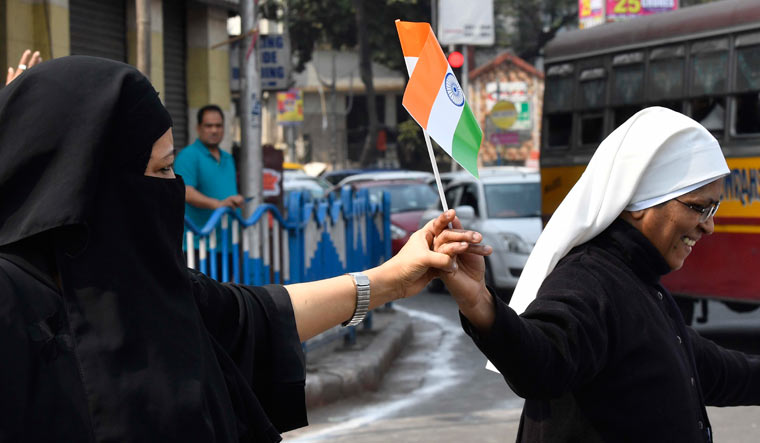 People take part in the human chain to register their protest against the CAA, NPR and NRIC, in Kolkata | Salil Bera

The human chain from Shyambazaar in the north to Golpark in the southern part of the city will be formed at noon for 10 minutes, said organisers

It was organised by United Interfaith Foundation India (UIFI), an inter-faith group comprising leaders of different religious communities in the state. 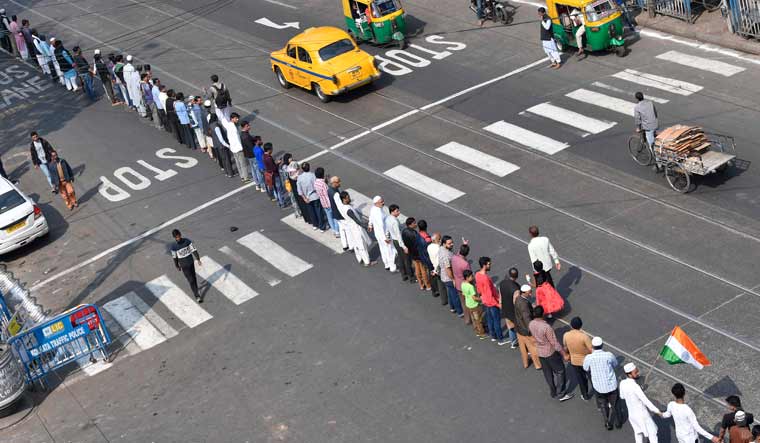 People take part in the human chain to register their protest against the CAA, NPR and NRIC, in Kolkata | Salil Bera

"We have decided to form a human chain on Republic Day as we want to drive home the message that we—Hindus, Muslims, Sikhs, Christians, Buddhists, Jains—are one. Everyone stands united as an Indian citizen and we will never allow anyone to sow the seeds of discord among us," UIFI general secretary Satnam Ahluwalia had told PTI earlier.

He said the decision to form the human chain was prompted by recent developments in the country that "attempted to divide the society".

In Agartala, too, Left-front organisations formed a human chain and took an oath to 'Save the Constitution'.