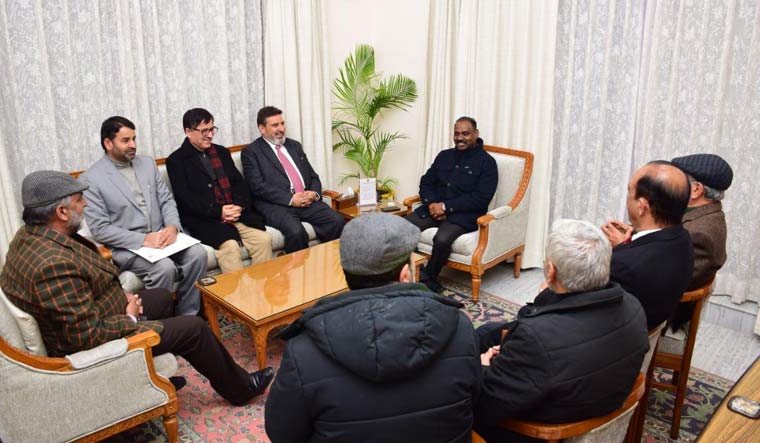 L-G G.C. Murmu meeting members of the politicians' delegation; Altaf Bukhari is seated to the left of Murmu | Twitter handle of ANI

Moving beyond Article 370, a group of politicians on Tuesday met Jammu and Kashmir Lieutenant Governor Girish Chandra Murmu and presented him with a memorandum. The memorandum calls for the restoration of statehood to Jammu and Kashmir and protection of right to employment and ownership of land for the residents of the Union territory.

The group presented a 15-point memorandum to Murmu, which, among other things, demanded the release of all political prisoners and others who have been detained after the removal of Article 370 and splitting of Jammu and Kashmir into two Union territories of Jammu and Kashmir, and Ladakh by the BJP government at the Centre.

Sources close to Bukhari told THE WEEK that he believed Article 370 was a thing of the past and its restoration was not possible.

“He( Bukhari) is of the view that the restoration of statehood to Jammu and Kashmir is possible, but not Article 370,” source said. “He believes protection of the rights of the people to jobs and property are just demands and cannot be rejected by Centre.”

“If those demanding aazadi and restoration of Article 370 succeed in their endeavours, he will be the first to congratulate them,” the sources claimed.

The group has also demanded that the cases registered against youth after August 5 should be withdrawn to create a conducive atmosphere for the revival of political activity.

According to sources, more politicians from the PDP, NC and Congress are likely to formally join the alliance led by Bukhari in the next two months to create an alternative to the mainstream, which had been led by the Abdullah and Mufti families.

The new alliance is likely to receive support from the Centre, which is desperate to fill the political vacuum in Jammu and Kashmir after the revocation of Article 370.

The new alliance will also have members from Jammu region to make it more representative.

Many people in Jammu echo sentiments in Kashmir that the removal of Article 370 has caused dis-empowerment of the people from Jammu and Kashmir and increased their anxieties and insecurities over losing jobs and property to outsiders.