Slogans were painted on the floor around the statue 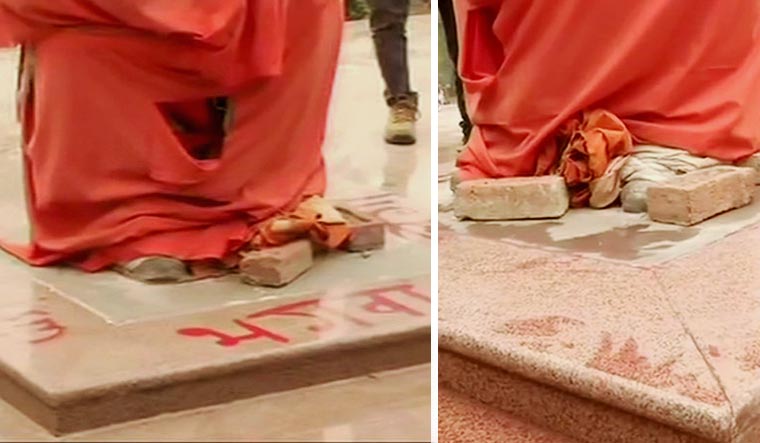 Slogans were painted on the ground around the Swami Vivekananda statue on the JNU campus. These were later cleaned off | ANI Twitter

A yet-to-be inaugurated statue of Swami Vivekananda in the Jawaharlal Nehru University (JNU) campus was vandalised, with slogans against the BJP painted on the floor around the statue.

The incident comes as JNU students have been engaged in protests against the university administration over a proposed hike in fees and imposition of new rules including a dress code and new curfew timings. While a partial rollback of fees was conceded on Wednesday, students continued their protests demanding a full rollback.

According to news reports, college authorities have vowed rustication to those who will be found guilty of the act of vandalism, with the college reportedly having recorded the people who committed the act.

A member of the National Students Union of India (NSUI), Sunny Dhiman, told ANI, “We condemn this incident. The statue of Vivekananda in JNU campus was not vandalised, some people had written on its platform. I don’t think any student of JNU could have done this. Now, we have cleaned it.”

Sunny Dhiman, NSUI: We condemn this incident. The statue of Vivekananda in JNU campus was not vandalised, some people had written on its platform. I don't think any student of JNU could have done this. Now, we have cleaned it. pic.twitter.com/LzA2stEMzL

The statue had been approved by JNU’s executive council in June 2018, with its placement opposite a statue of Jawaharlal Nehru next to the administration block. At the time, a JNU teacher’s association and the student’s union had questioned the source of funds for the statue—prompting the university to later say that one alumnus was voluntarily funding all of the expenses.

On Wednesday, students painted slogans against Vice-Chancellor Jagadesh Kumar inside the administration bloc, after hundreds entered his office and were unable to find him. The slogans included, “You are not our VC. Go back to your Sangh,” and “Mamidala, Bye, Bye Forever.” Other slogans included, “Bring Back Najeeb”, a reference to a JNU student who went missing from campus in 2016. Many such slogans covered the walls of the campus and administration bloc.

The planned hike in fees was significant, with the monthly rate for single-occupancy rooms going from Rs 20 to Rs 600. Likewise, the rates for double-occupancy rooms were to be raised to Rs 300 from Rs 10. In addition, a monthly service charge of Rs 1,700 was introduced, and the one-time mess security deposit was also hiked (from Rs 5,500 to Rs 12,000).

After the announcement of a ‘partial rollback’, PTI reported that the new fees would be Rs 200 for single-occupancy rooms and Rs 100 for double-occupancy ones.

On Wednesday, Education Secretary R. Subrahmanyam tweeted, “JNU Executive Committee announces major roll-back in the hostel fee and other stipulations. Also proposes a scheme for economic assistance to the EWS students. Time to get back to classes.”

In addition to the hike in fees, the students were protesting a change in rules. According to their joint statement, the issues they were protesting included a ‘draft hostel manual’, a ‘dress code’, as well as fines for ‘expressing dissent’. The university has denied any new plans to introduce a dress code or curfew, saying that the aforementioned sections, asking for students to be 'properly dressed' or to be back in their hostels by 11pm,  were present in the old rules, with some of them having now been relaxed.