High command had decided to form coalition even before consulting me, he said 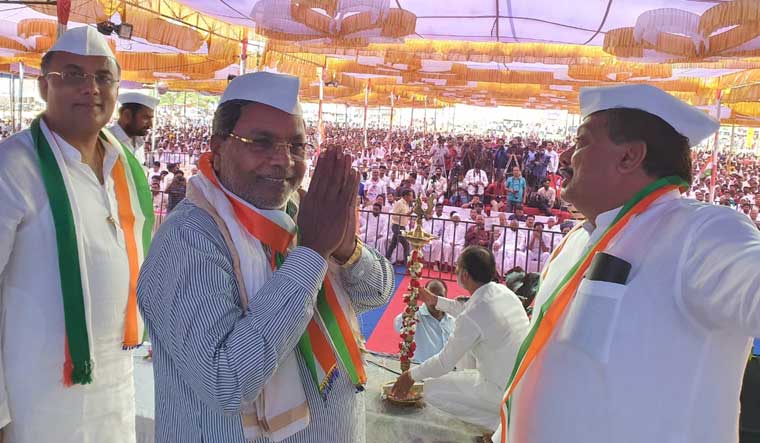 Siddaramaiah addressing a rally in Vijayapura on Tuesday

"I never opposed (Mallikarjun) Kharge for chief minister. In fact, I was not even present when my party leaders met Deve Gowda to discuss the possibility of a JD(S)-Congress coalition government,” said former Karnataka chief minister and leader of the opposition Siddaramaiah in Vijayapura on Tuesday.

Siddaramaiah, who is busy touring the poll-bound constituencies ahead of the December 5 bypolls, alleged that he suspected that the JD(S) had a secret pact with the BJP.

"Neither I nor the Congress high command have opposed Kharge for CM. In fact, I was not in the meeting. The high command had decided to form the coalition with the JD(S) even before consulting me. How can Deve Gowda claim that I scuttled Kharge's chance, " asked the former chief minister, recalling the events that lead to the formation of the coalition government after the 2018 assembly polls delivered a hung verdict.

The Congress party, which has already zeroed in on the candidates in at least eight out of the 15 constituencies, has witnessed stormy scenes with senior leaders like K.H. Muniyappa and B.K. Hariprasad walking out of consultation meetings this week, claiming that they have been sidelined. Congress leader D.K. Shivakumar, who is out on bail in a money laundering case, has been hospitalised with complaints of chest pain. That leaves Siddaramaiah with the tough task of picking the right candidates for the remaining seven seats as the bypolls will decide the fate of the BJP government, which needs to win at least six seats to survive.

The BJP is hoping to field the disqualified rebel MLAs from the Congress and the JD(S). But that would be possible only if the Supreme Court, which is slated to give a ruling on November 13, would overrule the disqualification of rebels.

The BJP is also facing heat of rebellion as the defeated BJP candidates in these constituencies are unhappy with the decision to field the party-hoppers instead of the party loyalists. Bharamgouda (Raju) Kage from Kagwad and Ashok Poojary (Gokak) have met the Congress leaders, seeking tickets.

Siddaramaiah clarified that the Congress is not inclined to do an 'operation hasta' (luring BJP rebels).

"Congress will not try to lure the rebels from the BJP. But it will certainly welcome those who ascribe to the party ideology and accept the leadership. The BJP, on the other hand, is a master of 'operation kamala', which was first started by Yeddyurappa in 2008, when nine Congress MLAs were lured into BJP fold," said Siddaramaiah, alleging that the BJP was known for immoral politics.