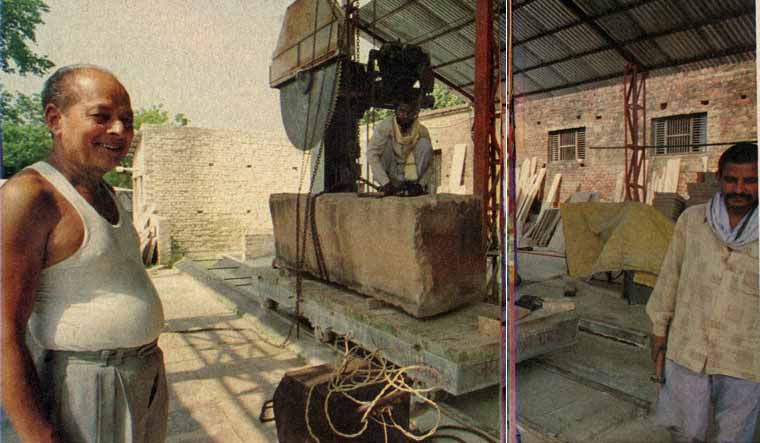 This article was originally published in THE WEEK issue dated June 7, 1998

Two bombs have been ticking away in India for years, one in the Pokhran desert of Rajasthan and the other in Ayodhya. The BJP-led government gladly pulled the pin at Pokhran, flexing its nuclear muscle; a Shakti Peeth temple that Hindu sanyasins have planned near Pokhran will symbolise this 'victory'. After the thermonuclear bang, it is the turn of the Ayodhya bomb, which is also being assembled on the sands of Rajasthan, not by nuclear scientists but by master-craftsmen who are chipping away on exotic pink sandstone. There will be no victors or vanquished after this blast, though.

The BJP is worried about the political cost of detonating this bomb, but the Vishwa Hindu Parishad (VHP) is defiant. "We will start construction at the Ram Janmabhoomi site within two years," said its working president Ashok Singhal.

Though one-fourth of the work is over, actual construction at the disputed site can begin only after all the suits relating to it are annulled and land is allotted to the Ram Janmabhoomi Nyas. Asked about the VHP-initiated construction work at Karsevakpuram near Ayodhya, Mahant Nritya Gopal Das, deputy chief of the Nyas, asserted that "the Nyas and the VHP are one" on the question of temple construction. "The sole objective of the Nyas is to build the Ram temple and it is committed to this goal," he said.

This goal may be realised sooner than most people think, if Samajwadi Party chief and former defence minister Mulayam Singh is to be believed. "The Sangh Parivar has hatched a conspiracy to bypass the courts and erect a temple at Ayodhya and make it a fait accompli, as they did in the case of the demolition of the Babri Masjid," he told THE WEEK.

"Everything is getting ready in Ayodhya, Lucknow and Rajasthan, so that the temple itself can be put together in a matter of days and hours. My information is they are planning to do it in July or August [1998]."

Mulayam, who stopped the kar sevaks who stormed the Babri Masjid in 1990, visualised a scenario of what might happen: "The PAC (Provincial Armed Constabulary) of Uttar Pradesh will surround the site and will not let in anyone other than VHP volunteers. In addition, they will bring in Central paramilitary forces. The plan is to have an ordinance issued either by the Vajpayee government or the Kalyan Singh government permitting construction of the temple, as the land is already with the Central government. They will hoodwink the courts and the people as they did last time. They think it is easier now because they have power over the Central and state governments."

Champat Rai, a joint-secretary of the VHP who is overseeing the project, sought to allay fears. "We have no intention of violating any court order," he said. "Besides, before the temple is built, we have to level the ground. There is a 50-foot depression just behind the disputed spot, which will take months to fill. The soil in the area will require a 'raft foundation', which means extending the concrete platform built in July 1992 to cover twice the area it now covers. Only then can we put up the walls and pillars. None of this can be done overnight as our critics allege."

But the fact is that the VHP has been prefabricating the temple since 1991 and, according to Rai, almost 30 per cent of the work is complete. "People appear to have woken up seven years late," said Rai. "Even in the months following December 6, 1992, when our organisation was briefly banned, the stone cutting and chiselling continued. I see nothing wrong with it: our activities were banned, carving stone pillars was not!"

The first sandstone blocks arrived in Ayodhya from Bansipahar, near Bharatpur in Rajasthan, in late 1989—soon after the Shilanyas—and were stored at a workshop near the Ramghat Chowraha, more than a kilometre from both the Ram Janmabhoomi site and the VHP headquarters at Karsevakpuram.

Work on the stones began only in end 1991 with about eight workers who had come from Mirzapur, Agra, Rajasthan, and even Gujarat. "In late 1995, we stepped up the pace," said Rai. "We had Rs 8.29 crore in the bank, collected during our shila pujan and other, programmes. We thought that instead of merely letting it accumulate interest in the bank—and then paying income tax—we might as well use it up.”

Just when the BJP was in sight of victory in the Lok Sabha elections, which were a few months away, the VHP purchased a stone-cutting machine for its Ayodhya workshop. Today, at Karsevakpuram, 5 km from the disputed site, nearly 150 craftsmen are chiselling sandstone into shape even as two stone-cutter machines slice the huge stones; the machines and a generator had been bought from Gujarat for Rs 13 lakh. "The machines have made the work a lot faster," said Anant Ram, technical supervisor of the Karsevakpuram workshop, which is spread on 2sqkm.

In late 1995, the VHP contracted out part of the carving work. It chose Sompura Marble Works, Bharat Shilp Kala Kendra and Mahadev Shilp Kala Kendra, all three located in the BJP-ruled Rajasthan.

"Ashok Singhalji has come here a number of times," said Ramesh Chandra Sompura, proprietor of Sompura Marble Works in Pindwara town. "I went to Ayodhya, where they showed me a sample and asked if I could replicate it. I said I could, and got the contract."

So too did Jawanji, owner of the Mahadev Shilp Kala Kendra at Ajari village, and Kastoorlal Padamji of the Bharat Shilp Kala Kendra in Kojra town. None of them had any previous connection with the BJP or VHP. "But as devout Hindus, we are keen to see the Ram Mandir built," said Jawanji.

The workshops vary considerably in size, from 50-square-foot enclosures to sprawling fields stretching over half an acre. A few are covered with flimsy shamianas, but most have only the sky above.

The completed temple, which is estimated to cost Rs 120 crore, will be in two tiers, comprising 212 pillars, 106 each on the ground floor and first floor. "There will be three kinds of pillars," said Rai. The ground floor pillars will be 16.5 feet tall, the first floor ones 14.5 feet. "First, there will be 72 complete pillars, with carvings on all four sides. The remaining 34 will be half-pillars or quarter-pillars, partially embedded in the walls."

"We expect to complete at least 50 per cent of the pillars in the next two years," said Rai. So far, 32 of the complete pillars have been prepared at Sirohi and 18 at Ayodhya. "I have already sent eight truckloads to Ayodhya," said Ramesh Sompura. In fact, finding no space left to store the pillars coming from Rajasthan, the Ram Janmabhoomi Nyas recently bought 3 acres land.

Most of the carvings depict floral motifs or gods and goddesses. "The temple facade as such will have nothing to do with Rama or the Ramayana" said Rai. "It will resemble the Akshardham temple in Gandhinagar, which was also designed by the same architect, Chandrakant Sompura."

Kanaram Patel, the representative of the Ram Janmabhoomi Nyas in Sirohi, is now looking forward to the detailed plans for the sheekhar, or spire, of the temple which are expected soon from Chandrakant Sompura. "The sheekhar will be 132 feet high," said Patel. "That will take much longer to carve, at least five years. But it will be a challenge."

The real challenge, however, will be for the BJP to allay fears of a VHP-BJP game plan in the light of Singhal's statement that temple construction will begin in another two years. Nritya Gopal Das, who has been charge-sheeted by the CBI in the demolition case, believes that the atmosphere is conducive for the work to begin this year itself. "God does not wait for anyone to get majority," he told THE WEEK. "So Bhagavan Ram will also not wait for the BJP." While expressing "satisfaction" with the BJP, he said, "Our main cause of suspicion is persons like Jayalalithaa and Chandrababu Naidu."

Rai too took a potshot at the BJP without naming it. "Everyone is in favour of this mission, but they don't have the courage to implement it," he said. Supporting this sentiment were VHP activists Nagendra Upadhaya and Hariram Gupta who supervise the workshop at Karsevakpuram.

Jayalalithaa, meanwhile, sought to set the record straight about her support to the Kar Seva at Ayodhya in 1990. "Madam wanted a temple and a mosque to exist at the same place," AIADMK leader T.M. Selvaganapathy told THE WEEK. "She was never for the demolition of the mosque."

Another BJP ally, Mamata Banerjee of the Trinamool Congress, was noncommittal about the Sangh Parivar's 'hidden' agenda. "I really don't know what the VHP is doing, whether it is trying to build any temple at Ayodhya or not," she said while campaigning for the panchayat elections in West Bengal.

While the allies try to soft-pedal the issue, the Muslims and the opposition parties have voiced fears of the Sangh Parivar's belligerence. "Today, there is a BJP government at the Centre and in UP and Rajasthan, where the stone-carving work is being done. Anything is possible," said CPI leader A.B. Bardhan. "If we don't want to get the kind of shock we did on December 6, 1992, secular parties, individuals, cultural and even religious organisations must come together."

Bardhan’s demand that they undertake a "secular jagran" found acceptance with the Samajwadi Party's Amar Singh, who said that mobilising people was the only way to thwart the "BJP's nefarious strategy".

Salman Khurshid of the Congress went a step further and accused Home Minister L.K.. Advani of "overseeing the entire affair and he is himself an accused in the demolition case".

The convener of the Babri Masjid Action Committee in Ayodhya, Haji Mahaboob Ahamad, also believes that the temple project has the blessings of Advani and Murli Manohar Joshi. Most of the Muslims of Ayodhya are for a judicial solution of the matter.

"We will respect the verdict of the court at all cost," said M.A. Latif, a former teacher. Muslim politician Syed Shahabuddin has no objection to the pillars being built. "But the suspicion is that they might start building (the temple) upon the concrete platform, which was erected during the Kar Seva in July 1992, defying the Supreme Court orders. Once they start constructing, they will build up public pressure in such a way that it will be impossible to stop them." He demanded that the government immediately ban transportation of the pillars to Ayodhya from Sirohi.

The pillars on which the 'Ayodhya bomb' sits have taken shape after the agitation for it began 14years ago, the same number of years Ram was in exile in the forest. "The temple is inevitable for Ram's rajyabhishek," said Nritya Gopal Das. But would He have wanted it on the debris of a mosque?