Haryana: Dushyant Chautala may be kingmaker, but who will he make king?

Will JJP opt to go with the BJP or the Congress? 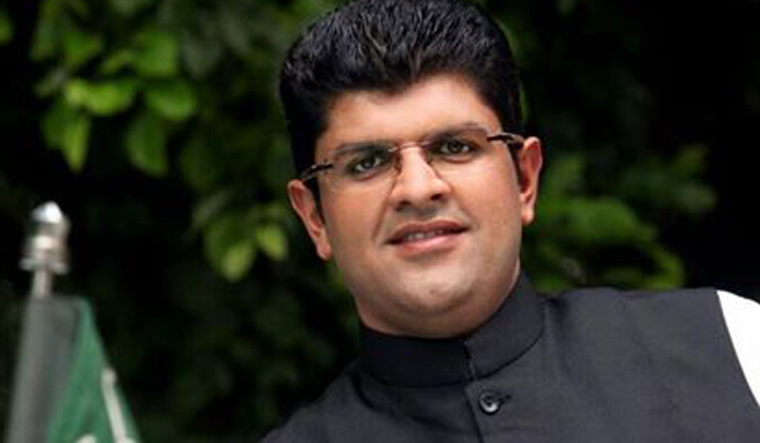 The 'Aya Ram, Gaya Ram' times may well be back in Haryana which is witnessing a hung assembly. For Chief Minister Manohar Lal Khattar, who expected to sweep the polls, it is so near yet so far from a simple majority. It is not a distance that his party president Amit Shah cannot easily bridge, given the way they handled misses in the past—notably in Goa and Karnataka. Nonetheless, it has been a slap on the party's face by voters, who, just five months ago, gave it a perfect 10—all the ten Lok Sabha seats in the state.

It could be a case of the evolved Indian voter, among other things, knowing the difference between the Lok Sabha and the Vidhan Sabha elections. It can easily be argued that they have chosen between CM Khattar, and former chief minister and senior Congress leader, Bhupinder Singh Hooda.

Khattar, a pracharak who was hardly known as a politician when he arrived on the scene in 2014, may apparently not have done the wonders that people expected of him. Or may be the Jat issue tilted the scales against the BJP; for not only is Hooda a widely known and fairly respected Jat leader, but the real man of the moment, Dushyant Chautala, has also established himself as a Jat leader.

That, however, does not make it a cake walk for the Jat leaders who, with the help of a few anti-BJP independent MLAs, can come together and form a government. For one, Hooda and Dushyant have to sort out the issue of who will be the chief minister even before they go to the Raj Bhavan and stake claim.

Dushyant's Jannayak Janata Party (JJP) is a breakaway group of the Indian National Lok Dal, founded by his great grandfather Chaudhary Devi Lal, and nurtured by his grandfather Om Prakash Chautala. The JJP leader's ancestors have signed deals with the BJP in the past, and been in a coalition government. That time however, the INLD was the senior partner, and the BJP had little more than token presence. Will some, or all the newly elected JJP MLAs, opt to go with the tried and tested BJP? More importantly, will some of them switch to the saffron side of the assembly? The next few days will have answers these questions.

Five months after he founded the JJP, Dushyant dabbled with a number of possible suitors, including the AAP and the BSP among others. The Congress and the INLD have never held hands, and Dushyant did not consider the Congress as a suitor either. Will they try to get together now? That is the big question that Haryana's political observers and enthusiastic voters have begun asking. The grapevine has it that Dushyant met Deepender Hooda, former MP and son of Bhupender Hooda on Tuesday.

In the old days, Congress leaders in the state were notorious for carrying brief cases packed with currency notes to woo MLAs of other parties. The BJP may make use of central agencies if gentle offers of ministerial berths don't work.

Devi Lal himself had, in the early 80s, taken a busload of his MLAs to a resort in Gurgaon –Orbit resorts, owned by the Badals—for safekeeping from the Congress. It looks like Dushyant may have to follow the footsteps of his great grandfather after whom he named his party, to safeguard his MLAs from the BJP.