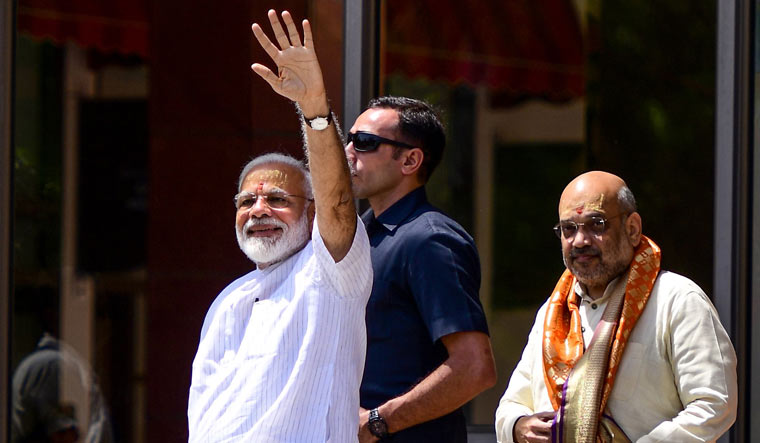 “Tell me, should the water, which belongs to you, be allowed to flow into Pakistan. Shouldn't you be getting that water. How is it possible that the same (river) water turns Pakistan green, but lets Haryana's fields go dry. Our water has been flowing into Pakistan for 70 years. The Congress governments have been mute spectators. I will not allow even a drop of water, which is your due, to flow into Pakistan,” Prime Minister Narendra Modi said to thunderous applause during his last election rally in Haryana on Saturday. Haryana and Maharashtra will go to polls on Monday

Modi raised the issue of river water sharing during the election campaign in Haryana again as the BJP is seeking to get another mandate for its first-ever government in the agrarian state. The saffron party has used the emotive issues of nationalism, abrogation of Article 370, NRC, surgical strikes, and water sharing during its campaign in both Haryana and Maharashtra. On the last day of the campaigning, the prime minister attacked the Congress over illegal land deals in Haryana, and giving water which is due to the state to Pakistan.

Home Minister Amit Shah, who was in Maharashtra, on the last day of the campaign again raised the issue of NRC, and relevance of Article 370 to Maharashtra.

PM Modi had spoken about stopping water flowing into Pakistan for third time in row in Haryana. Pakistan had reacted to Modi's election speech four days ago, saying stopping of water will be perceived as an act of war. Modi, in his speech on Friday, in an oblique reference to the neighbouring country, reminded Pakistan that he is “Modi” and he does what he says.

The water dispute between Haryana and Punjab has been a perennial cause of bickering between the two neighbouring states. Three rivers—Sutlej, Ravi and Beas—flow into Pakistan from Punjab. Under the Indus Water Treaty, India is obligated to give water to Pakistan. India had explored ways to divert water to other Indian states after escalation of tensions with Pakistan.

Reference to Pakistan and lessons taught to the neighbouring country have been recurring themes in speeches of the senior BJP leaders, particularly after Modi and Shah set the tone. Their attacks on Pakistan are largely welcomed by the electorate as it had reflected in mandates the saffron party has been receiving in various elections.

Maharashtra Chief Minister Devendra Fadnavis and Haryana Chief Minister Manohar Lal Khattar are seeking the mandate on works done by them during the last five years along with the strong nationalistic decisions taken by Modi-Shah combine—the most recent being abrogation of Article 370 and promise to implement NRC across the country to weed out outsiders.

“Ever heard of anything ‘temporary’ lasting seven decades? Misdeeds of Congress in Kashmir eroded the Sufi tradition of that land. The Congress ensured women, SC and ST communities do not get their rights. Kashmiri Pandits suffered. Militancy rose. Our government changed that,” Modi said. He addressed rallies in Rewari and Sirsa in Haryana.

Meanwhile, the campaigns of the Congress have been lackluster with senior leaders keeping mostly away from campaigning in both the states even as the BJP leaders, including Modi and Shah, have been combative as they addressed multiple rallies in the states.

In Haryana, Modi also raised issues related to Army as a large number of people from the state are in the armed forces. “Earlier, there used to be bomb blasts in the country. Haven't they been stopped now? Now, terrorist are killed in their homes. Those who nurture terrorism are crying in front of the world,” Modi said. He added that his government built memorial for the 33,000 armed forces personnel killed in action, increased the scholarship for children of martyrs, started 'one rank, one pension' scheme, gave impetus to manufacturing of bulletproof jackets and Tejas aircraft.

Attacking the Congress, Modi said, “The Congress and affiliated parties have looted the state and its land. Anyone in the Congress family wanted land, they headed to Haryana, including the son-in-law (Robert Vadra).”

“The Congress never gave enough respect to India's traditions, faith and culture. Now, we have brought Kartarpur closer home. Soon it will be opened,” the PM added.

Shah also focused on nationalism as he said, “There are only two countries in the world who avenge killings of their soldiers, the USA and Israel. Now, we have shown India is the third country added to that list.” Shah was speaking during a rally in Navapur, Maharashtra.

He also attacked Rahul Gandhi and Sharad Pawar for questioning the relevance of Article 370 in Maharashtra.