Ravish Kumar: If you love democracy, fight the media 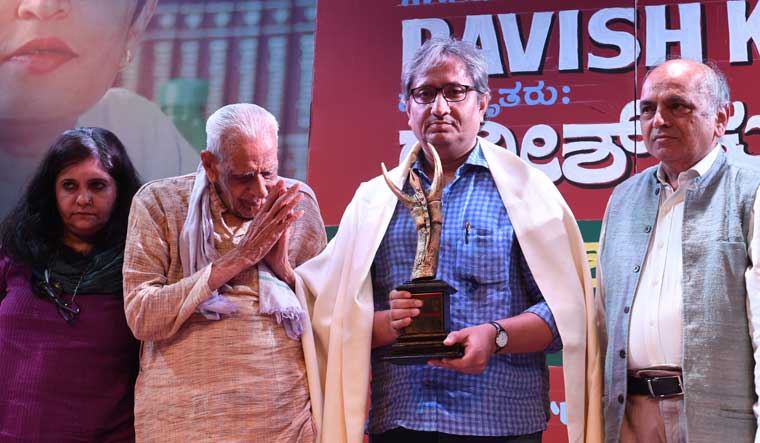 “Indian media is killing Indian democracy. If you love democracy you have to fight the media. Media has fought a long battle for democracy. But, today, things have changed. Throw away the newspapers, stop subscribing to television channels and get down to the streets. It looks impossible today, but tomorrow you will do it,” said television journalist Ravish Kumar, a Ramon Magsaysay awardee, after receiving the Gauri Lankesh Journalism Award in Bengaluru on Sunday.

Calling upon the citizens to invoke their moral power and raise their voice against injustice, Kumar said the media, which was the only hope for the common man, was no longer reliable. "If change has to come, it will come through you. There is no democracy left in the opposition parties too and they cannot save democracy. So, the common man has to evolve as a leader. We have been only dislodging one political party from power only to see the next one loot and plunder. The language of the TV anchors has changed, voices of dissent are eliminated, the one who opposes is labelled as anti national, pro-Pakistan or urban naxal. The mainstream media is drowning the truthful voices on social media," asked Kumar, adding that democracy does not stay strong only with 80 per cent voting.

Kumar alleged that the Modi government which has abrogated Article 370 has no intent to "embrace" the Kashmiri as the PM proclaims.

"PM says we need to embrace the Kashmiris. But my question is how do we do it, when Kashmir is under clamp down? Even an MP needs to take a visa from the court to visit Kashmir. First of all, the government must ensure Kashmiris get to embrace their own family members. What is the great idea behind having rallies/meetings over Article 370 in Bhubaneswar or Bihar? Why not in Srinagar or Vaishnodevi? The Kashmir issue is being imposed on the youth of Hindi Pradesh (UP and Bihar), which continues to remain under neglect. Come October, the Hindi Pradesh will witness the Ram Mandir drama on a daily basis," said Ravish.

Slamming the Centre for imposition of Hindi, Ravish said, "The youth of Hindi Pradesh are not employable as they have no good universities or education. The number of Hindi speaking UPSC aspirants has reduced, 10 lakh students of class 10 and 12 in UP have failed in Hindi. So, the imposition of Hindi seems meaningless as Hindi has got no special treatment or encouragement. The problem is the system and not the language. So, one nation, one language or Hindi as a unifier is a sham. A Bengaluru taxi driver can speak up to five languages. And Hindi has not grown richer because the natives have not bothered to learn other languages," said Ravish.

Remembering Gauri Lankesh, who was shot dead two years back by religious fundamentalists, Ravish urged civil society to raise their voice stating that their silence would prove costly.