Both videos, which have gone viral, are from Pragya Thakur's visit to Sehore 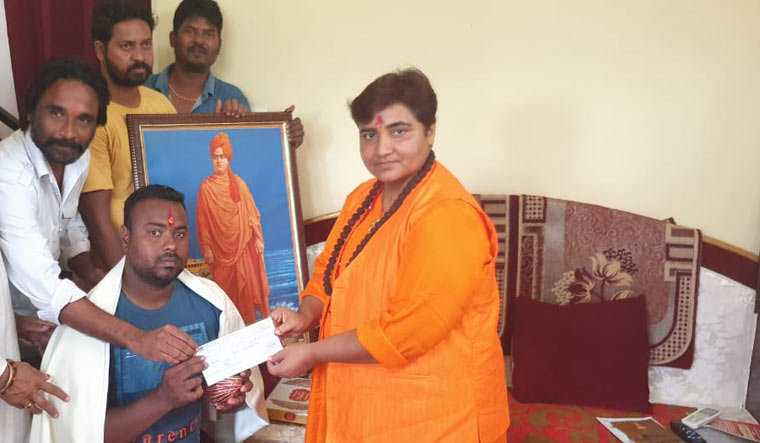 Controversial BJP MP from Bhopal Sadhvi Pragya Thakur has landed in a controversy again, this time by calling the media “dishonest”. A video of the MP, laughing and calling the media dishonest, has gone viral on social media.

Another video of Thakur giving out Rs 500 notes to common people has also become viral and is being connected to the fact that in her election nomination affidavit, Thakur had cited her source of income as ‘begging’.

Both the videos are from Pragya Thakur’s visit to Sehore, a separate district from neighbouring Bhopal but part of the Bhopal parliamentary constituency.

In the first video, Pragya is seen saying that none of the mediapersons in Sehore were honest. Pragya is told that the cameras were on, but she goes on to say, “Listen to what I have to say in your praise. The entire media of Sehore is dishonest,” while laughing out aloud.

The context of Pragya's statement is the fact that during her visit to the town in July to attend a BJP workers’ meet, she had claimed that “members of Parliament were not meant to clean drains”. This comment attracted massive media attention across country and Thakur was said to be upset with mediapersons in Sehore on this count.

Pragya Thakur has been caught in a series of controversies for shocking comments ever since she was nominated as the BJP candidate from Bhopal in April this year. Despite the party’s strict instructions for her not to make such public comments, Pragya comes out with controversial statements on and off, landing the BJP in a soup.

The Congress attacked Pragya on the issue again. Party spokesman Pankaj Chaturvedi said that it seems Pragya Thakur has lost her mental balance. “Sometimes, she sees a martyr in (Nathuram) Godse, sometimes, she says Hemant Karkare was killed due to her curse, then she says MPs are not meant to clean drains, and now, she is trying to take out her frustration on the media,” Chaturvedi said.

“We urge Prime Minister Narendra Modi to pay attention to the person they gave a platform from Bhopal Parliamentary seat. We are now squarely worried about her mental health and the PM should take some action regarding this,” the Congress spokesman said.

Chief spokesman of BJP Deepak Vijayvargiya said that it has to be seen as to what context Pragya was interacting with the media and the comments of politicians should be seen only in the respective context.

BJP spokesman Rajnish Agrawal added that the party was well aware of the commitment of the media in Madhya Pradesh and the fact that it highlighted the BJP even when the party is in opposition.