Ahead of polls, Modi on inauguration spree in Maharashtra, Jharkhand, Haryana

Modi will launch a farmers' pension scheme in Jharkhand on Thursday 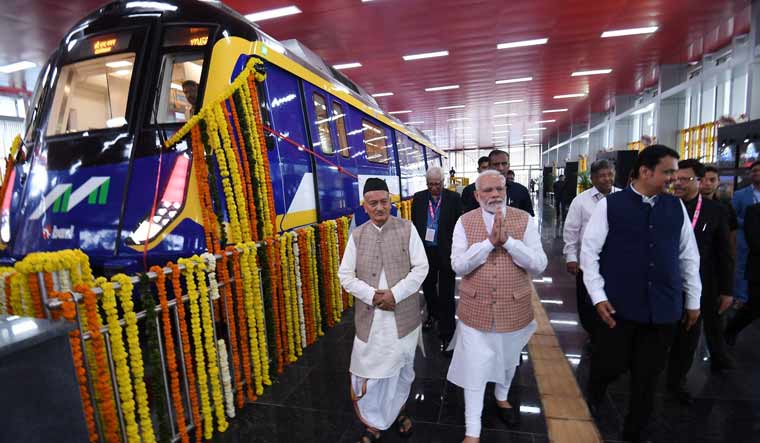 With the elections in three states around the corner, the BJP-ruled states are in overdrive to launch and inaugurate new projects. After touring the poll-bound states of Haryana and Maharashtra, Prime Minister Narendra Modi will be in Jharkhand on Thursday to launch the farmers' pension scheme announced in the Union budget.

The schedule for elections to three states—Haryana, Maharashtra and Jharkhand—are expected to be announced this month, with polling in October. BJP working president J.P. Nadda has also separately toured these states to review the BJP's election preparations. The BJP is hoping to cash in on nationalist fervour after scrapping of Article 370 in Jammu and Kashmir. The party has already started programmes across the country to “educate” people on the Article 370 issue, and how the state has been integrated into India.

To address farmers' distress, the BJP is hoping that the new pension scheme would provide relief to small and marginal farmers, thus overcoming any resentment they might have. The new scheme, Kisan Maan Dhan Yojana, will be launched in Ranchi, the capital of Jharkhand. The scheme is expected to help 5 crore farmers by providing a minimum pension of Rs 3,000 per month, when they attain the age of 60 years. The scheme has an outlay of Rs 10,774 crore for the next three years.

The government has already started registration for the scheme. All the small and marginal farmers who are currently between the ages of 18 to 40 years can apply. The farmers will have to make monthly contributions ranging from Rs 55 to Rs 200, depending on their age of entry, in the pension fund till they reach 60 years of age. The Central government will also make an equal contribution of the same amount in the pension fund.

This will be the prime minister's second visit to Jharkhand after assuming office. Ranchi was the venue for this year's International Yoga Day function in June in which Modi had participated.

The BJP had put a non-tribal face, Raghubar Das, as the chief minister. He will be seeking a second term in the coming elections.

Earlier, on September 7, Modi laid the foundation stone for three metro lines in Mumbai and other metro-related projects worth over Rs 20,000 crore, while in Aurangabad, he addressed state-level women self-help groups. Modi also inaugurated a industrial city in Aurangabad. In Maharashtra, the BJP will be contesting the state elections along with the Shiv Sena, while the Congress and NCP combine are on the other side.

A day later on September 8, Modi was in Haryana to inaugurate and lay the foundation stone of various projects. Modi chose Rohtak, the pocket borough of Congress's presumptive CM candidate Bhupinder Hooda, for the rally. This also happened to be the day when Modi completed 100 days in office. He said removal of Article 370 was the most important step of his government's first 100 days in power. This was Modi's first visit to Haryana after he was re-elected to power in May.

The new projects launched in Haryana included a medical college and other infrastructure projects for Faridabad, Rohtak and Karnal.

In Haryana, Manohar Lal Khattar is seeking a second term. This was the first BJP government in Haryana.