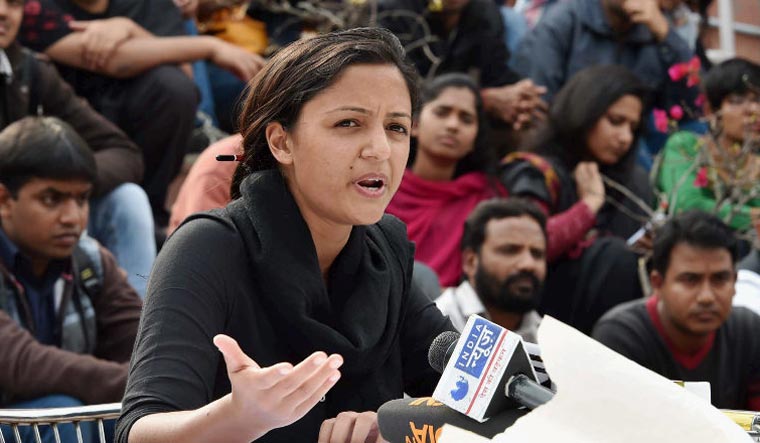 Delhi Police's Special Cell is looking into a complaint filed against Jammu and Kashmir People's Movement leader Shehla Rashid by a Supreme Court lawyer accusing her of "spreading fake news with the intention to malign the image of Indian Army".

In his complaint to Delhi police commissioner Amulya Patnaik on Monday, Alakh Alok Srivastava said the allegations made by the former JNU student leader in her tweets on Kashmir are "absolutely false and concocted", Rashid had, in her tweets, alleged that Army personnel "ransacked" houses and thatfour men were "interrogated (tortured)" in Shopian.

Srivastava said the allegations made by the former JNU student leader are  baseless as she has not produced any "voice recording" of the alleged torture or "name, date, time" of the incidents.

He accused Rashid of "deliberately and intentionally spreading fake news with the intention to incite violence in the country" and maligning the image of Indian Army.

He said her action is "prima facie an offence of sedition" since she had intended to "excite disaffection towards the Government of India".

Police said the matter is being examined.

"The complaint has been received and it has been marked to Special Cell which is examining the complaint," said a senior police officer.

Reacting to the controversy, Rashid demanded a "fair and impartial" probe in the matter.

"All of my tweets are based on conversations with people. My thread highlights the positive work of the administration too. Let the Army conduct a fair and impartial probe and I'm willing to share the details of the incidents mentioned with them," Rashid wrote on Twitter.