Politics of appeasement was reason for continuance of triple talaq: Amit Shah 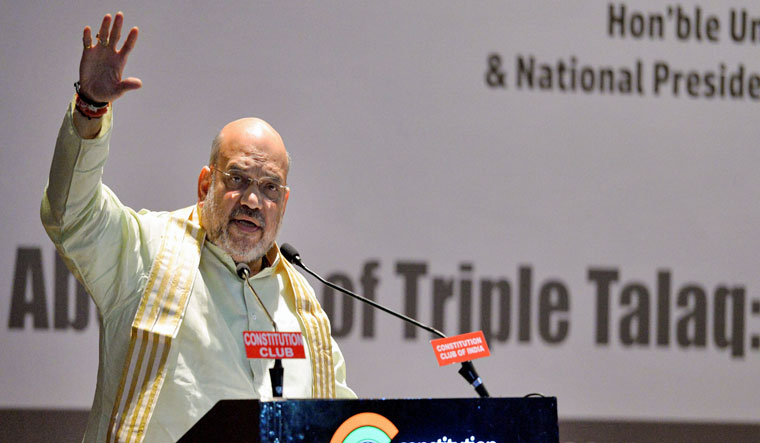 Union Home Minister Amit Shah said on Sunday the politics of appeasement, which led to the Partition, was the reason for the continuance of the "evil practice" of triple talaq for so long.

"Some people level allegations against BJP government that such action is anti-Muslim. I want to make it clear that this is only and only to benefit Muslims," he said.

It was a "nightmare" for crores of Muslim women who were denied of their rights, he said, .

Coming down heavily on the Congress, he said the party has "no shame" and continues to oppose the law on triple talaq.

Referring to the Rajiv Gandhi government's decision to bring a law to overturn the Supreme Court judgement in the Shah Bano case, he said it would be considered a "black day" in the history of Parliament.

There is no doubt in the minds of those favouring triple talaq and those opposing it that it was an "evil practice".

People should welcome moves for eradication of any evil practice, but there is opposition in case of triple talaq. "The politics of appeasement is responsible for it," he said.

Some parties are in the habit of coming to power on the basis of vote-bank politics, that's why such evil practice is continuing, he said.

The politics of appeasement has been a hurdle in the path to achieve development and social cohesion in the country.

"The election of Narendra Modi as Prime Minister in 2014 was the beginning of the end of politics of appeasement and the 2019 mandate is to end it forever," said Shah, the BJP president.

He was speaking on 'Abolition of Triple Talaq: Correcting a Historic Wrong' at an event organised by the Syama Prasad Mookerjee Research Foundation here.

The legislation to criminalise instant triple talaq was passed by Parliament in the last session.