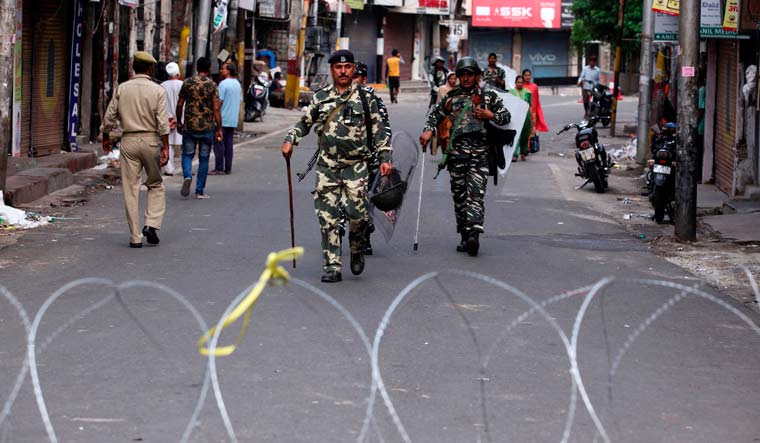 Security personnel patrol along a street in Jammu | AFP

Even as China expressed serious “concern about the situation in Kashmir'' in the light of India's move to revoke Article 370, which gave a special status to the state, the international community has largely refrained from making comments, though the measured reactions have been largely supportive.

The US department of state called it an internal matter of India, though it urged all stakeholders to maintain peace. Donald Trump, the American president, had some days ago stirred a controversy when he had, during the Pakistan prime minister's visit to Washington, offered to mediate between the two countries on the Kashmir issue.

UAE ambassador to India Ahmed Al Banna's response is significant, since the tacit support shows that the Islamic world is not against India as Pakistan had hoped it would be. Banna said that the UAE had taken note of India's decision of non operationalisation of some sections of Article 370 of the Indian Constitution related to Jammu and Kashmir. He, too, termed it an internal matter as stipulated by the Indian Constitution and noted that reorganisation of states was not a unique incident in the history of independent India and that it was mainly aimed at reducing regional disparity and improving efficiency.

Prime Minister Narendra Modi has wooed the Islamic world with good success since he took charge of the nation in 2014. Apart from the UAE, India has also upped its equation with Saudi Arabia in a big way. In fact, India was  invited as guest of honour at the Organisation of Islamic Coopration (OIC) meet in Abu Dhabi, even though tensions between India and Pakistan were high since the Balakot strike had just taken place. Pakistan's protests over Sushma Swaraj's presence at the plenary were ignored.

With reports that Pakistan may go to the OIC over India's decision on Kashmir, the UAE statement is a big shot in the arm for India. It does not seem likely that Imran Khan is going to get support from that quarter.

Neighbouring country Sri Lanka has also hailed the move, highlighting another aspect. Sri Lankan Prime Minister Ranil Wickremesinghe tweeted: “I understand Ladakh will finally become a Union Territory. With over 70 per cent Buddhist, it will be the first Indian state with a Buddhist majority. The creation of Ladakh and the consequential restructuring are India's internal matters. I have visited Ladakh and it is worth a visit.”

India has been working hard at its diplomatic ties with neighbours, through the BIMSTEC multilateral as well as through ASEAN. India's development aid to Sri Lanka is increasing. A massive housing project is on, and India is focusing on early deliveries. Several homes have already been handed over to beneficiaries. India, along with Japan, has also taken up the development of Colombo Port. Mention of Buddhist Ladakh and its development should find resonance with Buddhist countries on India's east.

China, Pakistan's all-weather friend, noted that the Kashmir issue was a legacy of the history between India and Pakistan, which is also the consensus of the international community. China said that the parties concerned should exercise restraint and act with caution, especially to avoid actions that unilaterally change the status quo and exacerbate the tension. However, China has also termed unacceptable the decision to reorganise Ladakh as a Union Territory. It said that  China always opposes India's “inclusion of Chinese territory” in the western section of the China-India boundary under its administrative jurisdiction.

India has given a sharp rejoinder to the Chinese statement. Ministry of External Affairs spokesperson Raveesh Kumar said, “The Jammu and Kashmir Reorganisation Bill 2019 ... which proposes the formation of a new Union Territory of Ladakh is an internal matter concerning the territory of India. India does not comment on the internal affairs of other countries and similarly expects other countries to do likewise. So far as the India-China boundary question is concerned, the two sides have agreed to a fair, reasonable and mutually acceptable settlement of the boundary question on the basis of political parameters and guiding principles for the settlement of India-China Boundary question. Pending such a settlement, both sides have agreed to maintain peace and tranquility in the border areas on the basis of the relevant agreements.''